Started in Aleppo, the group has decreased in numbers, and now performs in Turkey 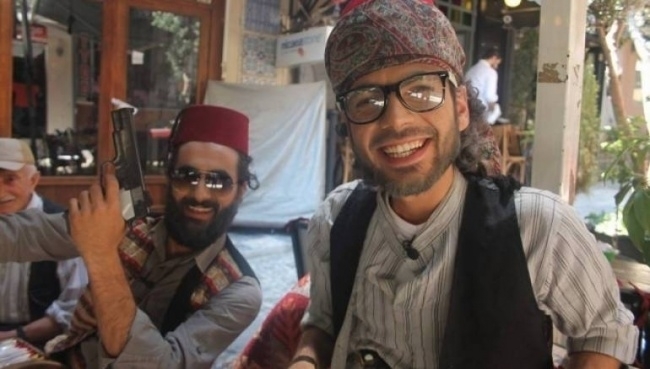 'Khoutwa' (Step), a theatrical band founded in Aleppo and consisting of Syrian youths is now performing in Istanbul.

After being founded in 2012 with 13 members, the band now consists of only four, after most of the members traveled to Europe, explained Yusuf Baker, the stage manager.

According to Baker, most members got to know each other via “revolutionary coordination pages” and found that acting and music was a common hobby and talent among them.

Step band members decided to resume their shows in Istanbul six months after their arrival in Turkey, taking advantage of the touristic aspect of the city, and hoping to raise awareness of the Syrian revolution, according to Shahin Shikho, writer and actor.

“We were surprised by the number of people who were impressed and enjoyed the show," he said. "Some of them cried, and others even swore to the actor who played the Shabbiha’s role."

Shiko explained that in the following days, people used to gather around them once they start buiding the sets.

“Street shows need an official permission, but the Turkish authorities helped us," he said.

The group divided shows into two categories; indoor, which are exclusive to Syrians, where the members criticise the revolutionary and opposition’s mistakes and performances, and outdoor, which targets all audiences, and concentrates on the regime’s crimes.

The indoor performances were shown in a rented room, called "The Shop", which  was transformed into a theatre, but later, the four members had to leave it because they were not able to pay the rent of $300.

The band’s actors have to work during the day to secure their income. Baker works in a sewing workshop in the morning, and Shikho works as a Turkish-Arabic translator.

"Other members work in sewing workshops and restaurants," Shikho explained.

The four remaining members insist on carrying on their work in the band, despite challenges and difficulties like the lack of performance space and facilities for photography.

“There are another three members with me in the band; Mahmood, Yusuf, and Salah Baker,” Shahin said.