Defense Minister İsmet Yılmaz, speaking before the parliamentary vote, said immediate steps should not be expected after the motion is passed 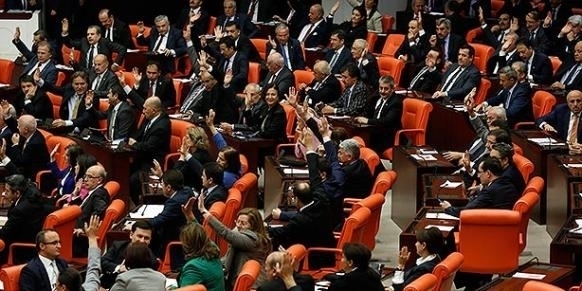 The Turkish Parliament voted on Thursday for a motion authorizing the government to send troops abroad and allowing foreign forces to use Turkish territory for possible military operations against the Islamic State (IS).

The motion was passed by 298 "yes" votes while 98 lawmakers voted against it.

Turkey has said it will join international efforts to fight IS but is yet to define what role to play to help these efforts. The motion prepares the legal ground for any Turkish involvement.

Defense Minister İsmet Yılmaz, speaking before the parliamentary vote, said immediate steps should not be expected after the motion was passed.

The motion was opposed by the main opposition Republican People's Party (CHP) and the pro-Kurdish Peoples' Democratic Party (HDP).

The CHP argues that the motion is aimed at the Syrian regime, not IS. “The government sees developments in the region as an excuse to engage in armed confrontation with the Syrian regime and is using IS as a pretext to that end,” CHP Deputy Chairman Faruk Loğoğlu said in a speech on behalf of his party at Parliament before the vote.

Loğoğlu dismissed the government argument in the motion that Turkey is facing security threats from the Syrian regime, saying that this claim is not substantiated with evidence.

The HDP's Ertuğrul Kürkçü also argued that the government is not concerned about fighting IS, accusing it of turning a blind eye to the group's massacres in Syria and recruitment of militants in Turkey.

“You have no intention to start fighting IS,” Kürkçü told Parliament.

Opposition lawmakers also took an issue with the fact that the motion referred to “foreign armed forces” instead of “foreign military forces,” with the CHP's Loğoğlu arguing that it was an intentional choice aimed at preparing the ground for hosting foreign militia on Turkish territory.

Mehmet Şandır, who addressed the parliamentary session on behalf of the Nationalist Movement Party (MHP), said he hoped the choice of the phrase was an unintentional mistake.

Emrullah İşler of the Justice and Development Party (AK Party) responded to the opposition's accusations that the motion is aimed at the Syrian regime, defending the government's Middle East policy in the face of the turmoil since the eruption of popular uprisings in several Arab countries that became known as the Arab Spring.

In an address to Parliament before opposition lawmakers' speeches, Defense Minister Yılmaz reiterated the government position on the Syrian regime, saying it is "the source of the chaos raging in Syria."