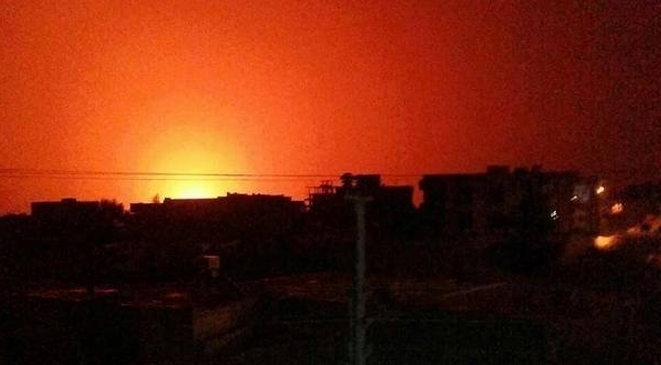 Besides their military impact, the air strikes by U.S forces on the Islamic State in eastern Syria are also having a significant humanitarian impact.

On Tuesday last week, the U.S. air force, with support from Saudi Arabia, the UAE, Qatar, Jordan and Bahrain, launched attacks against various positions in Syria, most of which were said to be controlled by IS and other Takfiri groups.

While the military effect of these attacks is yet to be assessed, their economic impact has already been felt. According to reports from various sources, including activists and monitoring groups, the attacks have already damaged grain silos near the town of Manbij, east of Aleppo, an oil market, also near Manbij, and several makeshift refineries across the eastern part of the country.

The DEZGAS gas processing plant, better known as Conoco, which was under the management of the French oil company Total before the beginning of the uprising, has also been targeted, although it has apparently not been damaged.

It is difficult to value the cost of the damages inflicted on these various projects but their impact will be particularly significant given that economic and social conditions in areas held by ISIS are already very poor and production activity is almost non-existent.

On September 30, the US said that the majority of oil refineries used by IS had been destroyed. Although the formal objective of destroying these refineries is to prevent IS from generating money, their impact will also be felt by the population.

These refineries are used to produce gas oil, which is the main means of heating for the population and is also used by farmers to run their various machines and equipment. Therefore, the destruction of the refineries will have a negative impact on the next agricultural season, also meaning that the price of agricultural products will become more expensive, they will prevent people from heating themselves properly during the winter season, and they will increase transportation costs.

Already, in Deir-ez-Zor, the price of gasoline and gas oil has reportedly increased because supplies of these two products have decreased.

Meanwhile, the grain silos of Manbij used to produce enough flour to feed 1 million people every day. In the last two years, given the increasing poverty of the population, the inflation and the poor agricultural crop, the consumption of bread had become more important than ever before for most of the population. If no alternative to supply flour and bread is found, the destruction of the silos is likely to have an important humanitarian impact across Syria’s northeastern region.

Until then, neither the regime nor IS had dared destroy the silos, which makes it very difficult to understand the motives of the Americans.

Beyond the headlines and the threat posed by IS, the American attacks have reminded all that under the control of IS live millions of Syrian civilians that have already suffered from more than three years of war. Also, only a week after they began, the attacks have already confirmed what everyone knew: America’s approach in Middle East conflicts takes no account of the plight of the populations.