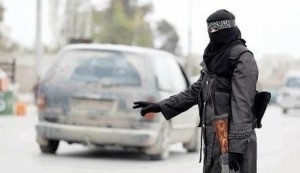 Many women from Aleppo who wear the hijab have complained that ISIS fighters have burned their coats as they were being checked at ISIS checkpoints on their way to Turkey. The phenomenon has been reported frequently as they pass near Mareh toward Jarablus.

As one woman explained: "Although I wear hijab and a thick coat, and that only my eyes are uncovered – as I am accustomed to this type of dress since my childhood – the fighters of ISIS took off my coat and burned it in front of my eyes and obliged me to buy a loose black gown from a nearby shop".

"I suspect that the organization has a factory for the production of these gowns that do not have any shape or form," the woman added.

A newly married women begged the organization not to burn her new white coat, but they silenced her, directing insults at her also.

Women who used to wear hijab in most areas of Aleppo were surprised by the way ISIS treats them and its insistence on imposing a particular dress that looks like a chador.