Media organizations continue to promote material aimed at provoking terrorism, violence and the spread of foreign fighters, says Syria's representative to the UN 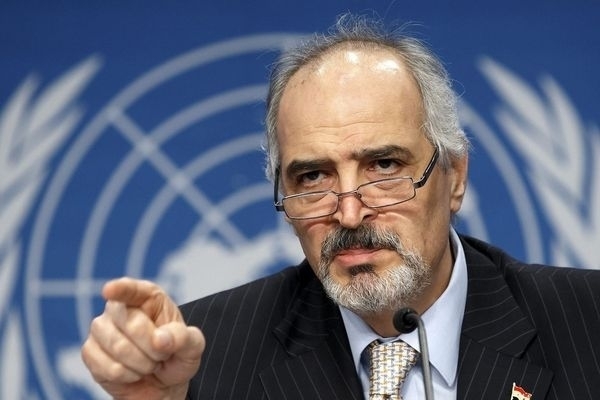 Syria’s Permanent Representative to the United Nations, Bashar al-Jaafari, stressed the unprecedented media campaign aimed at provoking terrorism and violence, and the spreading of mistruths concerning the situation in Syria, is in blatant violation of UN Security Council (UNSC) resolutions and journalistic ethics.

In an open session before the UNSC on Wednesday under the title “Protecting civilians in armed conflicts: protecting journalists”, Jaafari pointed to the mobilization of media outlets which promote terrorism and attract foreign terrorist fighters to travel to Syria, in deliberate violation of Security Council resolutions on counterterrorism.

“These campaigns were accompanied with attempts to silence the Syrian media through targeting its institutions and personnel”, Jaafari said, pointing out that 33 journalists and workers at media institutions were killed and dozens of others were injured or kidnapped by armed terrorist organizations, while some Security Council member states overtly brag of training these groups on Turkish and Jordanian soil.

Jaafari said the Syrian government continues to work on dealing with the media in an open way, noting the government issued new media reforms in the first weeks of the crisis aimed at boosting media work, transparency and freedom, clarifying that the Syrian government is fully committed to UN Special Envoy Kofi Annan’s six- point plan on journalists’ entrance and work inside Syria.

Damascus’ commitment was manifested through the granting of licenses to hundreds of Arab and foreign journalists, which was confirmed by Annan, the representative said.

Jaafari noted that the Syrian government still welcomes and receives journalists who are willing to enter Syria legally through the official border crossings so that they could work freely.

The official said the Syrian government pays full attention to the safety of journalists and demanded them not to enter the country illegally and to avoid the areas where terrorist groups, including ISIS, have spread.

Jaafari also noted that while he was talking before the UNSC, al-Jazeera was interviewing Nusra Front leader Abu Mohammad al-Jolani in an effort to promote terrorism and threaten the Syrian government and its people.

The offical affirmed that conducting such an interview is a flagrant violation of the UNSC resolutions related to counterterrorism, particularly Resolution No. 1624 on preventing the incitement of terrorism, noting that it is an obvious attempt by the Qatari regime at “laundering the profile of Jabhat al-Nusra”.