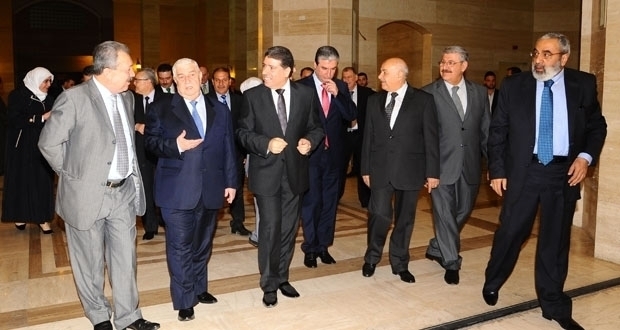 Syria's Cabinet discussed a number of economic and social issues on Tuesday, including procedures for regulating market prices, and setting working hours for government employees during the month of Ramadan from 9 am to 3 pm.

Chairing the weekly session, Prime Minister Wael al-Halaqi pointed out that the government is working towards implementing measures and decisions to support the Syrian Arab Army and bolster its steadfastness, as well as taking care of martyrs’ families.

Halaqi said the recent spiritual meeting on Monday, which brought together the five Patriarchs of Antioch and All the East in Damascus, is proof of the Syrian community’s unity and cohesion in the face of the crisis.

Foreign Minister Walid al-Moallem said the Syrian Arab Army’s recent achievements in Hassakeh are very significant as it thwarted a political project that was being prepared for the province.

In regards to the results of Turkish elections, Moallem said the elections brought an end to Turkish President Recep Erdogan’s ambitions and proved to the local and international community that the Turks reject Erdogan’s erroneous policies, his blatant interference in neighboring countries’ affairs, his role in undermining security and stability in the region, and his actions that led to Turkey being a hotspot for terrorism.