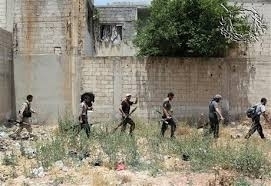 Western diplomatic sources confirmed that dozens of “moderate opposition” fighters withdrew from the US Defense Department’s train-and-equip program after refusing to sign a contract guaranteeing not to fight against the regime of Syrian president Bashar al-Assad. Meanwhile, regional and Western countries are seeking to persuade the Obama administration to provide political mandate to the international coalition jet fighters to support the opposition fighters against the Islamic State of Iraq and Syria (ISIS).

US Congress approved a three-year plan with a $500 million USD annual budget for training and arming 5,000 fighters annually to achieve three goals; fighting ISIS, defending the areas controlled by the "moderate" opposition, and pushing towards a political solution in Syria. Congress also agreed to set up four camps, including two in Jordan and Turkey.

According to sources, about 6,000 fighters applied to join the Pentagon program, supervised by Gen. Michael Nagata, in parallel with a secret CIA program to train and equip opposition fighters.

About 2,500 fighters were said to have passed the first phase of testing, with only 1,500 of them chosen to continue training. The sources noted that about 200 fighters arrived in two training camps in Jordan and Turkey, "but only around 50 of them remained in the program after the rest refused to sign a paper containing a pledge not to fight regime forces, or because their names did not match the names registered in the preliminary lists, meaning only dozens of fighters received training in the camp in southern Turkey".

Agence France Presse reported from Pentagon spokesperson Colonel Steve Warren that while the stated goal is to train 5,000 fighters per year, only "a hundred or two" Syrians began training in the two camps in Jordan and Turkey. US Secretary of Defense Ashton Carter told Congress on Wednesday that it is “very difficult” to identify fighters who meet the specified criteria.

In addition to operational difficulties, the program also faces strategic problems between the Obama administration and some of its allies, such as Turkey. Sources claim Ankara believes the US aims to train the fighters only against ISIS, at the expense of fighting the Syrian regime, stating: "it was clear from the very beginning that the task of these Syrian fighters is to fight ISIS at the moment".

Turkey and Western countries have attempted to convince Washington to broaden the mission of the international coalition fighter jets to provide air protection to opposition fighters, but the Obama administration has refused to approve any step that may harm Iranian interests or the current nuclear negotiations deal.

Coalition warplanes struck ISIS locations in Izaz Soran in the countryside of Aleppo last week, strengthening the position of the Syrian opposition fighters, the first step of its kind since the commencement of the coalition raids last September. The sources explained that the task of the coalition fighters in Syria is only to "strike any ISIS location that effects fighting ISIS in Iraq, because Obama's strategy is to defeat ISIS in Iraq first, in addition to destroying the infrastructure of the Islamic State in the north east of the country".

The sources believe the political mandate given to coalition fighters only to destroy "ISIS infrastructure, such as oil stations and command centers, within Iraq first", may explain the coalition's failure to prevent ISIS from controlling the city of Palmyra in central Syria weeks ago.