FSA forces killed in ISIS suicide blast in Marea close to the village of Om Hosh, recently seized by the hardline Islamist group 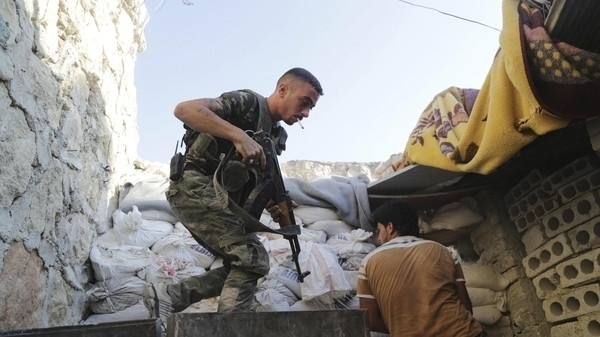 The FSA fighters were killed when two ISIS fighters blew themselves up after clashes erupted between the groups inside the al-Abbas mosque.

ISIS on Sunday seized control of Marea's neighboring town of Om Hosh, an advance that experts say may hinder Turkish efforts to set up its planned ‘safe zone’ along the border.

Late last month, the US and Turkey announced their intention to provide air cover for rebels and jointly sweep ISIS fighters from a strip of land near the border, according to Reuters.

The envisioned buffer zone would deny ISIS its last remaining access to the frontier with Turkey after a string of defeats by the Kurdish People’s Protection Units (YPG) militia drove it from its border positions further east.

In a statement dated Tuesday, ISIS said its fighters had attacked two buildings in Marea, killing nearly 50 members of an "apostate" militia that opposes it. ISIS claimed the targeted rebels were from a group operating under the banner of the Free Syrian Army.

In a relevant development, eight US fighter jets and 300 personnel have arrived at Turkey's Incirlik Air Base, official sources told Turkey’s Anadolu news agency on Sunday.

Incirlik has been opened to US forces following an agreement with the Turkish government in an effort to expand operations against ISIS targets.

On Monday, the US and its allies launched 29 air strikes targeting ISIS, destroying an explosives factory and other targets, Reuters said.

Eight strikes were launched in Syria, including five near Hassakeh, according to the international task force.