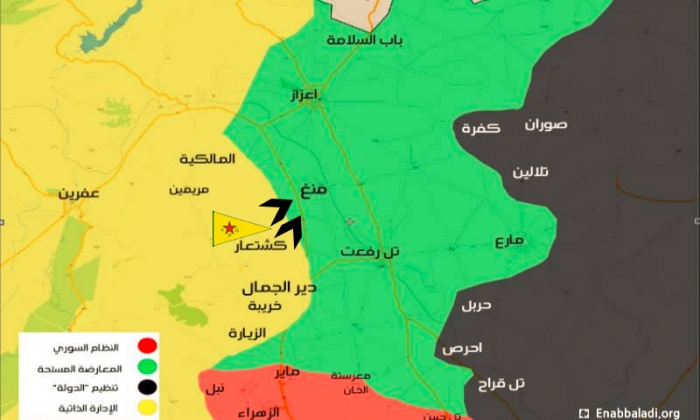 The Western-backed Syrian Democratic Forces advanced in the northern Aleppo countryside, taking control of new villages as Russian bombardment continued in the area on Tuesday, February 9.

Local activists said that the forces took control of the villages of Kafr Antoun and Tel Ajaar, overlooking the Menagh military airbase, after clashes with other opposition factions — which were targeted by Russian aircraft.

The Kurdish People’s Protection Units (YPG), part of the Syrian Democratic Forces, took control of the villages of Deir al-Jamaal and Mar Anaaz in the northern Aleppo countryside, after opposition fighters withdrew on Monday, February 8, without any clashes, according to Enab Baladi’s correspondent.

According to sources who spoke to Enab Baladi, the “delivery” of these villages came in light of an agreement between the Syrian Democratic Forces and the Free Syrian Army in the northern countryside to avoid the Russian bombardment and attempts of Assad’s forces and their allies to advance towards them.

The sources mentioned a possible scenario in which the area may witness a stop to the regime and Russian attack, beginning with the delivery of the Menagh village and military airport to the Syrian Democratic Forces, which would continue with the forces reaching the towns of Tel Rifaat, Azaz, and Meraa, at a later stage.

The completion of this situation would give the YPG control of the largest section of the border with Turkey, notably the Bab al-Salaama border crossing near Azaz, something fiercely rejected by Ankara, which considers the YPG the Syrian branch of the Turkish Kurdistan Workers’ Party, leading observers to predict its failure.

The Syrian Democratic Forces north of Aleppo, composed of fighters from the YPG and Jaish al-Thuwar, have recently managed to take control of a number of towns and villages which were under opposition control in the northern countryside, beginning with Marimeen and Kashtagar, and extending to Khareeba and al-Zeeyara.