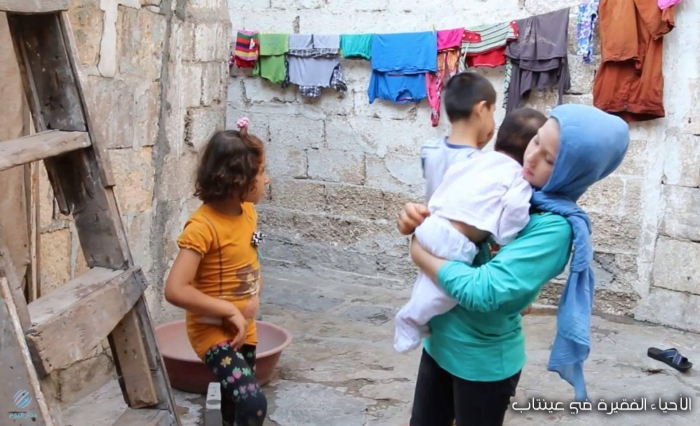 Hundreds of Syrians are living below the poverty line in several districts in the city of Gaziantep, southern Turkey, lacking basic elements of life like appropriate housing and clean drinking water, while illiteracy is rampant among children in light of the lack of available education providers.

The districts are among the most impoverished areas in Gaziantep, where about 20,000 Syrians live, in demolished houses, shops, and even abandoned “ruins,” whose monthly rent ranges from between 150 to 300 Turkish lira, in addition to the price of electricity and water – which reaches up to 200 Turkish lira, paid to the Turkish owners despite the lack of these services.

Umm Essam, a Syrian refugee, told Madar al-Youm: “My hand is growing weak and I lack money – this is what brought me to this neighborhood. I provide for five children, after their father was killed in bombardment on the Al-Shaer district in Aleppo. I work collecting plastic from garbage containers in the city, but recently I was pursued by the Turkish police, so I decided not to collect plastic from the bins. I’m a woman in my 50s and I don’t want to swallow another cup of the shame which I taste daily.”

Umm Essam complained about the greed of the owner of the “ruin” where she lives, especially after he raised her rent from 150 Turkish lira to 250 lira, despite the lack of water, which forces her to bring water from the nearby mosque in plastic bottles, in addition to not being able to pay the electricity bill to the owner, which caused the electricity to be cut. Today she collects firewood to cook what food is available for her five children.

Umm Mahmoud, who lives in the Tanaar district and is mother to four orphaned children, has suffered from the orphanages refusing to receive her children, despite her serious need of assistance because of her lack of work or a breadwinner. The orphanages justify rejecting Umm Mahmoud because of the lack of a death certificate for their father. She said she cannot obtain an official confirmation from the city because her means of communicating with relatives in Aleppo have been severed, according to what she told Madar al-Youm.

Many residents of these areas cannot send their children to school because of the lack of material means to do so. Sameer Abu Mohamed told Madar al-Youm: “I have six children who are not going to school. I work as a day laborer and my wages aren’t more than 30 Turkish lira, so how can I pay for transport for them which comes out to more than 500 lira, not to mention school supplies like stationary and other things. I send my oldest son to work to help me with the troubles of life, especially since I work a day and then sit for two.”

Sameer’s family faces major difficulties in securing treatment for their child, who suffers from a lack of growth and needs a daily shot which costs 25 Turkish lira. Sameer told Madar al-Youm: “I can’t secure the price of medicine for my son. His condition gets worse every day. I met with a number of organizations that deal with medical affairs, but I didn’t get anything but verbal promises from them, nothing more.”

The Zelal foundation for humanitarian care ran a survey, which Madar al-Youm obtained a copy of, based on a sample of 110 families, which showed that 180 children were not attending school.

The study showed that there were 12 disabled children and 36 infants, in addition to a number of children suffering from chronic diseases like thalassemia and heart diseases. Sixteen people from the children of the families that took part in the survey died in air raids on Aleppo city and its outskirts, where the families are from, while there are four missing and three arrested by regime forces and two by opposition forces. Absent are the Syrian civil society groups, which number in the hundreds and take Gaziantep as their base to attend to the life of Syrians there. The families, whom Madar al-Youm met a number of, confirmed that no one has inquired into their suffering despite their massive needs.