In a conference held in Turkey, plans for reestablishment of the Army of Tribes are discussed, with the specific aim of delegitimizing other groups in control of the area such as PYD 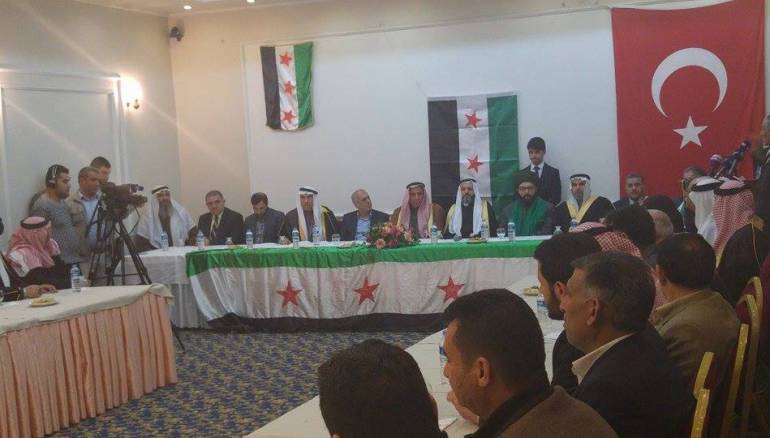 The Army of Tribes has come to light once again in a meeting on the sixth anniversary of the Syrian revolution this week, as Turkish figures discussed a proposal to reactivate the army.

The spokesman of the Higher Council of Syrian Tribes, Modar al-Asaad, told Zaman al-Wasl that on Tuesday, the sixth anniversary of the eruption of the Syrian revolution, about 300 figures held a meeting in the Turkish city of Urfa to discuss ways to reactivate the Army of Tribes.

The spokesman detailed that sheiks of tribes and clans, prominent figures, political and revolutionary leaders, defected officers, and Dr. Jawad Abo Hatab, the interim prime minister, had attended the meeting.

Asaad added that attendees at the meeting sought ways to reactivate the Army of Syrian Tribes. Currently, a few battalions of the tribesmen form part of the Euphrates Anger operation, which can participate in the liberation of the provinces of Raqqa, Hassakeh, Deir-ez-Zor and Manbij as fighters exclusively from the area, Asaad added.

The second aim of the meeting was to set up a civil administration for the future areas in concord with other political, military, economic, social and religious forces in the liberated areas.

The meeting aimed to delegitimize the Syrian regime, the Islamic State (ISIS), Syrian Democratic Forces (SDF), and other forces affiliated with the Democratic Union Party (PYD), which claim to be cooperating with Syrian tribes in areas controlled by them.

The spokesman mentioned that a general conference for Syrian tribes and clans will be held in Turkey in near future.

In the final statement of the conference, attendees highlighted that the international community, especially the United States, underestimates the power and effects of the Syrian tribes and clans in liberating the region of Jazeera and the Euphrates from the ISIS, the Syrian Democratic Forces and the Syrian regime.

The statement mentioned that the United States’ support of the Democratic Union Party, the “Yellow ISIS,” is tantamount to backing a replica of the Islamic State, stating that the PYD had similarly displaced people of more than 50 villages in the areas of Tal Barak, Tal Hamis, south of Al-Rad, Jabal Abdul-Aziz, Aghibish and Tal Tamer. This is parallel to ISIS’ displacement of people in Shaetat, Khabour, Shahil and Al-Hariji in Deir-ez-Zor.