Political representatives in south Damascus voice their rejection of an agreement between rebels and Iran which will see the exchange of fighters and their families from areas surrounding the capital and Idleb, opposition outlet All4Syria reports 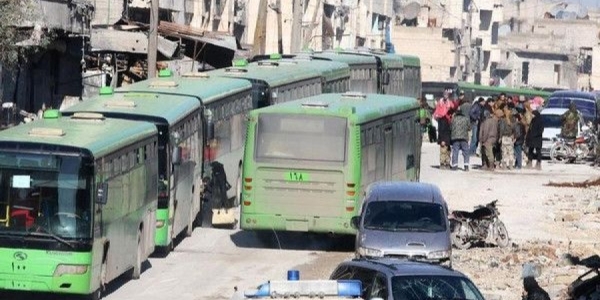 The political committee in southern Damascus has expressed its disapproval of an agreement reached by opposition factions in the largely Sunni towns of Zabadani and Madaya in the western Damascus countryside with pro-regime groups in the areas of Kefraya and Foua in Idleb, which are predominantly Shiite.

Rebels in Madaya remained silent on Sunday after fighters in Zabadani agreed on the settlement in an effort to reach a solution in the besieged border town.

Earlier, the Hayet Tahrir al-Sham and Ahrar al-Sham rebel groups reached the agreement with Iran, under Qatari sponsorship, for the evacuation of Kefraya and Foua over 60 days. In return, rebels and their families in Zabadani and Madaya may leave the cities for the north.

The agreement also says that a cease-fire will be implemented in both areas on Tuesday and aid will be allowed to enter, in addition to the Al-Waer neighborhood in Homs. Around 1,500 prisoners will also be released from regime prisons in accordance with the plan.

The political committee added that rebels in southern Damascus are not "interested in any agreement that links their situation with those of Kefraya and Foua," while it also appears that rebels in Madaya are not enthusiastic to leave for the north.