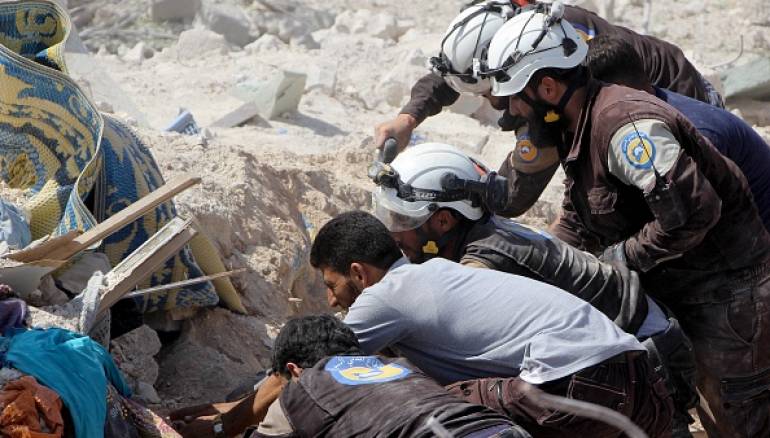 At least 42 people have been killed by Russian and Syrian airstrikes in the province of Idleb since Sunday as the regime army extends its ground and aerial attacks to rebel-held areas included in the de-escalation zone agreement, the Civil Defense group said on Tuesday.

Dozens of rebel fighters from the Sham Legion group were among those killed in strikes on the village of Mardikh near the provincial capital, opposition news feeds reported.

The Russian Defense Ministry on Tuesday denied allegations that its airstrikes had killed civilians in Idleb, saying that in recent days it had only bombed Islamist militant fighters in the area, according to Reuters.

Turkish Foreign Minister Mevlut Cavusoglu criticized Moscow on Monday for the attacks, saying that recent Russian bombing in Idleb had killed both civilians and moderate rebels. He added that the issue would be raised with Russian President Vladimir Putin when on his visit to Turkey this week.

Russia and the Syrian regime have stepped up their deadly aerial campaign on the provinces of Idleb and Hama since Tuesday, conducting more than 150 raids.

Moscow claimed that rebels had launched the offensive in Idleb to hinder the regime's advances in Deir-ez-Zor province.

The shelling was in retaliation to heavy aerial bombing on the Idleb town of Jisr al-Shugour near the border of the coastal Lattakia region, which left two civilians dead, rebel accounts said.