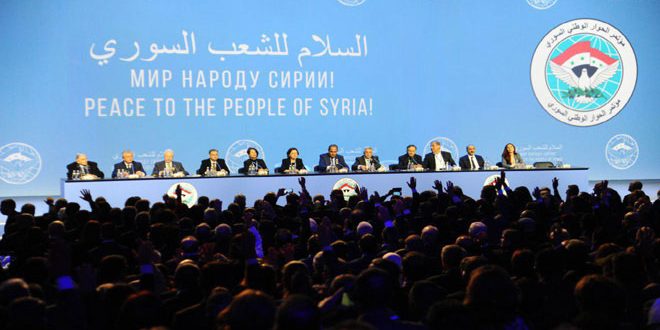 Social media sites have ignited with comments on the failure of Sochi's National Dialogue Congress. The head of the Building the Syrian State movement, Louay Hussein, summed up the conference in a short post on Facebook, saying: “Unfortunately, the Sochi conference failed. It failed because it could not produce anything but a simple closing statement that will have no effect whatsoever.”

Syrian activists circulated a photo of Mihrac Ural, whom they called a “war criminal,” shaking hands with the head of the Moscow platform, Qadri Jamil, before entering the conference hall. Ural, who has Turkish and Syrian citizenship, is the leader of the “Syrian Resistance” militia, an armed paramilitary group loyal to the Syrian regime active in northwestern Syria.

Activists said that Ural is a war criminal who oversaw the first massacre in the Syrian war, in the village of Bayda in Baniyas in May 2013, which killed more than 70 civilians. He has also been accused, along with the Syrian regime, of plotting two explosions in the town of Reyhanli on the border with Syria on May 11 of the same year, killing 52 people.

Activists circulated the hashtags “#conference_of_shame” and “#conference_of_humiliation” to express their rejection of the meeting, while loyalist activists circulated similar expressions against opposition figures participating in the conference, specifically leaders of the armed groups who refused to leave the airport in protest over the event’s logo comprising the Syrian regime flag. Regime loyalists viewed the scene as an insult to the Syrian state and the Syrian people, and stressed their position rejecting the revolution, which they labeled “terrorism” and a “foreign plot.”

Activists attacked some prominent participants by name, with Haytham Manna receiving a large share of the criticism. Opposition journalist Bassam Yousef said on his Facebook page: “In his press conference from Sochi on RT, Haytham Manna protested the Syrian authorities blocking 70 guests for Qadri Jamil’s movement and 20 from the Qamh Movement, and guests from two parties licensed in Syria to come to Sochi. The man wants his rights! My dear sir Manna, when we told you that [President Bashar] al-Assad’s forces had raped Syrian women and appealed to you to raise the subject politically, legally and in humanitarian terms, you ridiculed this and considered it merely lies. Then when 1,800 cases of rape were documented, you didn’t change your rhetoric. I’ll tell you something Mr. Haytham: ‘You have no shame!’”