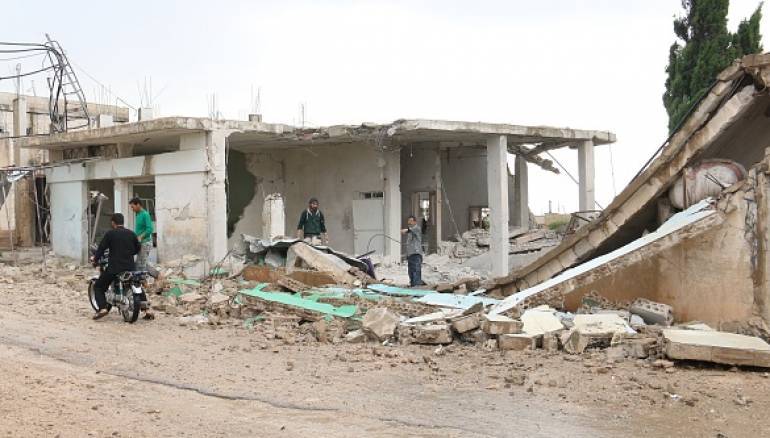 Acting President of the Syrian Coalition Abdulrahman Mustafa sent a letter to Turkish Foreign Minister Mevlüt Çavuşoğlu highlighting the violations being carried out by the Assad regime and Russian forces against civilians in northern rural Homs and southern rural Hama.

Mustafa called on Turkey to put pressure on Russia to stop the violations against civilians in the region. He called for sending a protest note reflecting the content of the letter to Russia and to express Coalition’s position “as the actions of the Russian forces and the so-called reconciliation centers in northern rural Homs blatantly violate the Astana agreement and the understandings made around it.”

Mustafa also called for forcing the Assad regime and the forces supporting it “to fully implement the de-escalation zones agreement and immediately stop to all air and ground attacks in these areas.”

The violent bombing campaign on norther rural Homs and southern rural Hama coincided with attempts by officers from the Hmeimeem air base to impose a side deal on representatives of the residents of northern rural Homs that risks leading to forcing the local population to surrender and displacing them to Syria’s north, Mustafa said.

“These attempts contravene the Astana agreement and threaten its collapse because of Russia's ignoring of the provisions and content of the agreement, most notably the article designating northern rural Homs as the second de-escalation zone.”

Mustafa stressed that “the Assad regime and its Iranian and Russian allies’ systematic destruction of hospitals and infrastructure, as well as their targeting of civilians in northern rural Homs, constitute a war crime under Articles 6, 7, and 8 of the Rome Statute, Article 49 of the Fourth Geneva Convention, and article 2 of The Convention on the Prevention and Punishment of the Crime of Genocide.

“These actions also contravene the U.N. General Assembly and U.N. Security Council’s resolutions, particularly Resolution 2336 which includes the Ankara cease-fire agreement signed under the auspices of Turkey and Russia on Dec. 30, 2016 as well as all a the relevant resolutions.”