Moscow contradicted Assad's pledges to retake the northern Syrian rebel stronghold by force, saying there "can be no question of an operation, of a major assault on Idlib" writes Al-Araby al-Jadeed 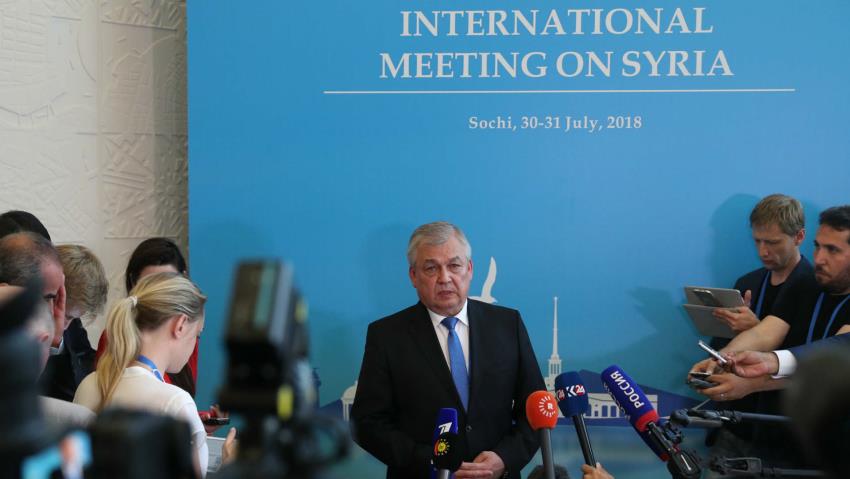 On Tuesday, Russia said there were no plans for a major assault on Syria's Idleb, despite President Bashar al-Assad earlier saying it was a priority to retake the province.

"There's currently no question and can be no question of an operation or a major assault on Idleb," Russia's Syria envoy Alexander Lavrentiev said in remarks reported by Russian agencies.

The comments came after talks in the southern Russian city of Sochi backed by Iran and Turkey and with representatives of Damascus and the Syrian rebels.

"We still hope that the moderate opposition and our Turkish partners, who took responsibility for stabilising this region, will manage it," Lavrentiev said.

"The threat coming from this zone is still significant," he added.

Last week, Assad said that retaking Idleb, currently dominated by rebels and extremist militants, was among the priorities of the Syrian regime, which is backed by Moscow.

Following the talks in Sochi, Syrian regime envoy Bashar Jaafari said that there could be "no compromises or middle-way solutions regarding Syrian territory returning to the control of the Syrian government".

Jaafari said the army would be within its rights to return the province to regime control by force if a settlement could not be reached, in comments translated into Russian by news agencies.

However opposition representative Ahmad Tohme demanded Idleb should move from "a de-escalation zone to a complete ceasefire zone".

Regime-backers Moscow and Tehran, along with rebel-supporter Ankara, agreed to create four "de-escalation zones" under the Astana peace process launched last year as part of a move towards a nationwide ceasefire.

Idleb is part of one such zone. It borders Turkey to the northwest but is otherwise almost totally surrounded by regime territory, prompting fears the government would eventually attack it.

Idleb has received many rebels and their families who were evacuated from other regions as part of Russian-brokered "reconciliation deals" that then saw regime forces move in to take rebel-held areas.

The UN warned in May that an assault on Idleb could be six times more destructive than what was witnessed in eastern Ghouta.

According to UN special envoy to Syria Staffan de Mistura, 2.3 million people could be affected by a siege on Idleb due to it having become the last rebel enclave and to where thousands of opposition fighters have been forcible evacuated.

More than 1,700 civilians were killed in the Russian-backed regime campaign to recapture eastern Ghouta.