Kurdish Democratic Union Party leader speaks with Saudi-owned outlet about the ongoing battle for the ISIS-held city, accusations of ethnic cleansing, and the Gulf crisis 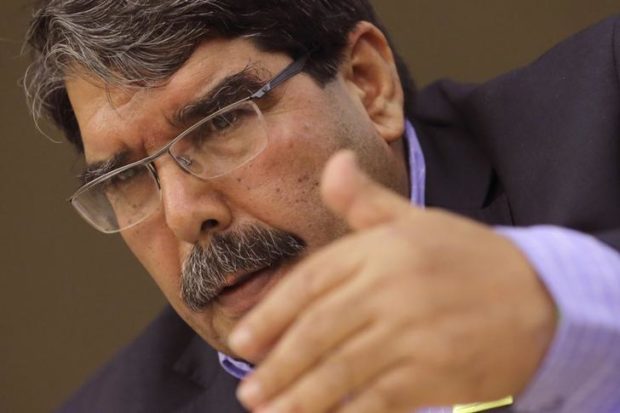 The head of the Kurdish Democratic Union Party, Saleh Muslim, warned that Syria’s de-escalation zones, in their current formula, would lead to more fighting.

The tripartite agreement between Russia, Turkey and Iran to establish de-escalation zones would “only delay the conflict for a certain period of time,” he said, adding, “The current plan does not serve the interests of Syria.”

In a phone interview with Asharq al-Awsat, Muslim stressed that the Syrian people reject the division of their country. He noted that democratic federalism based on geographic factors was a guarantee for the country’s unity.

He also said that the Syrian Democratic Forces, which include the Kurdish People’s Protection Units and other Arab factions, was ready to fight terrorism “at any place and in any time,” adding in this regard that the agreement with Washington has prioritized the fight against Islamic State (ISIS).

Asked about the battle for Raqqa, Muslim said that the liberation of the city was crucial as it has become a source of all terrorist activities in the Kurdish areas and northern Syria.

“Protecting civilians is the most important issue,” he stated, highlighting the role of the SDF in the progress achieved in the liberation of the ISIS stronghold.

Asked about concerns over a Kurdish-Arab conflict and demographic cleansing of the Arabs, the Kurdish official replied: “Foreign forces are trying to implement their agendas by instigating conflicts between the Kurds and Arabs. However, we do not see such things on the ground.”

“Arabs and Kurds live together in one house, in one village,” he said, adding that what is seen in the media was different from reality.

Muslim also ruled out any possibility to rebuild an alliance with the Assad regime.

Asked about relations with the United States, he commented: “The U.S. side is truly committed to the SDF, while the Kurdish side is staunchly determined to fight terrorism.”

The result of U.S.-Kurdish cooperation would be seen with the liberation of Raqqa, he elaborated.

On the Gulf crisis with Qatar, in particular the Turkish support for Doha, Muslim said that the deployment of Turkish forces in the Arabian Peninsula was foreign interference into the Arab countries’ affairs that would harm the Gulf society.

“Turkey is trying to achieve its Ottoman dreams and expand its rule over the region,” he stated.

“The dreams of [Turkish President Recep Tayyip] Erdogan have brought calamities to the Middle East and the region,” he added.

Muslim highlighted the need for Arab and Gulf states to reject any foreign interference in their area.