Turkey's threats in northeastern Syria have pushed the SDF into a Russian-sponsored rapprochement with the Assad regime. 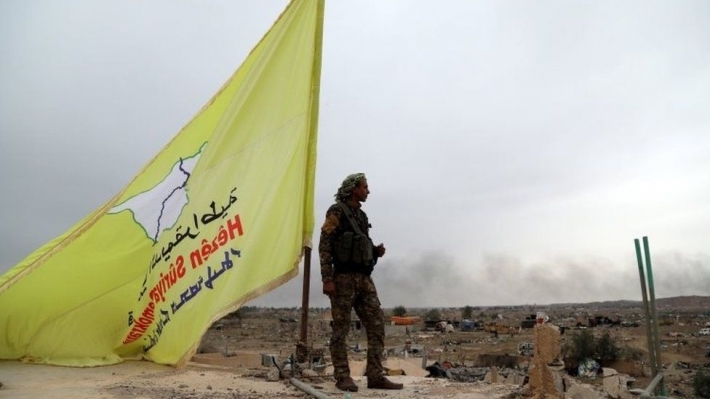 Since the end of last month, Turkey and its Syrian opposition allies have been threatening to intervene militarily in Northeastern Syria against the Kurdish-led Syrian Democratic Forces (SDF). Ankara considers the SDF, whose main component is the People’s Defense Units (YPG), as the Syrian branch of the Kurdistan Workers’ Party (PKK) a movement considered terrorist by the international community, which has been involved in a guerilla war against the Turkish state for decades. Since then, reports about an ongoing Russian-sponsored rapprochement in Syria between the SDF and the Assad regime in Damascus have been proliferating.

For example, the pro-Saudi pan-Arab newspaper Asharq al-Awsat has claimed that delegations from the Syrian Democratic Council (SDC, Political wing of the SDF) made several visits to Damascus, where they offered to give the Assad regime up to 75 percent of oil production in northeast Syria as a “gesture of goodwill”.

However, the SDC has denied these allegations.

“The reports of a dialogue with the regime are not true. The AANES has not and will not hand over any of its areas of control to the Syrian regime forces”, Luqman Ahmi, spokesman for the Autonomous-Administration of Northeastern Syria (AANES), said.

“Officially, the SDC has denied dialogue with the regime. I have myself asked officials from the SDC about the matter and they refuted it. Nevertheless, indirect talks through the Russian intermediary and military coordination might still be in place”, explains Kamal Sheikho, a Kurdish Qamishli-based journalist.

However, the pro-government newspaper al-Watan also reported that Syrian regime troops were returning to Northeast Syria.

Similarly, Kurdish politician Fouad Aleeko wrote in Nedaa Post an opinion piece, in which he claimed that Syria is likely to witness the return of the Assad regime to the eastern side of the Euphrates (which is controlled by the SDF).

“The regime has never considered these regions beyond its control”, he wrote. In fact, the Damascus government has maintained some kind of presence in SDF regions through government and administrative departments, such as that of civil affairs, as well as the presence of the security services in small parts of the cities of Hassakeh and Qamishli. The regime also controls to some extent Qamishli’s airport.

For Aleeko, the main outstanding issue between the two sides is that of decentralization: While the regime insists on the Local Administration Law 107, which was passed in 2011, the SDF insists on a more decentralized approach, that would allow Kurdish-majority regions in Syria’s northeast to self-govern.

A prospect that frightens nationalists in Turkey, where between 15 and 20% of the population is ethnically Kurdish, mostly in the northeastern part of Anatolia on the borders with Syria. “Turkey’s policy in Northeastern Syria is driven by a security obsession. Turkey is frightened that the establishment of an autonomous Syrian Kurdistan, like the Iraqi Kurdistan, would trigger a domino effect that would push its Kurdish population to ask for more autonomy. This fear of secessionist politics is linked to the Sevres syndrome, in reference to the Treaty of Sevres which unilaterally split Turkish territory into several occupation zones, including a Kurdistan”, explains Dr. Jana Jabbour, a political scientist specializing on Turkey, and Associate Fellow at the Issam Fares Institute for Public Policy and International Affairs (AUB).

But that’s not the only element factored in Turkish Foreign Policy. “Turkish President Recep Tayyip Erdoğan is preparing for the upcoming elections in 2023 (opinion polls have been forecasting a decline in the support for Erdogan’s AKP, editor’s note). He wants to appear as the protector of the Turkish republic, which would have been founded exactly a hundred years prior to the election”, Jabbour adds to the Observer.

But can Turkey conduct a military operation in northeast Syria without the approval of the U.S.? The latter has claimed, through several channels, that it does not condone any escalation in Syria.

“The U.S. is only present in the very east of the east of the Euphrates region. This means that the U.S. presence in the region is effectively minimal, therefore, a Turkish operation is not necessarily linked to explicit approval by the U.S.”, Sheikho told the Syrian Observer.

“It is clear that ever since the era of the Trump administration, the U.S. has subcontracted significant parts of the Syrian file to regional actors, among which Turkey. This, coupled with the fact that it maintained a military presence in the northeast of Syria, makes it unlikely that Ankara would launch any military campaign without a U.S. green light”, Jabbour says, however.

Russia, Turkey’s partner in the Astana platform, also seems to oppose any Turkish campaign in Northeastern Syria. Moscow has deployed warplanes in the Qamishli airport and its S-300 missile air defense in al-Tabqah, in the countryside of Raqqa. It has also engineered the rapprochement between the SDF and the Syrian regime as well as training exercises close to the frontlines with Turkey.

This was enough to reassure the Kurdish groups in Syria. The SDF-affiliated North Press has reported that the military campaign by Ankara was “suspended” due to the refusal of the U.S. and Russia. “It is not likely that there is currently a direct military action, and Ankara has suspended operations for the time being”, according to sources quoted by North Press. Upcoming meetings with officials from the U.S. and Russia are “not expected to achieve breakthroughs regarding the military operations demanded by Ankara in the region”, North Press added.

However, according to Kamal Sheikho, “a military operation is still possible.”