During the month of July 2021, at least 172 cases of arbitrary arrests were recorded in Syria, according to the Syrian Network for Human Rights. 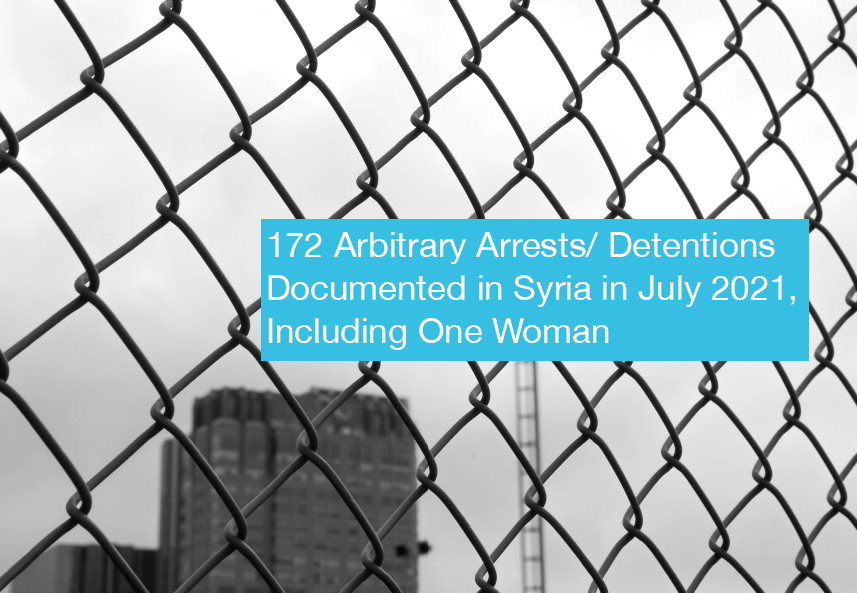 The Syrian Network for Human Rights (SNHR) said Monday that at least 172 cases of arbitrary arrests detentions were recorded in Syria during July 2021, noting that Daraa saw the highest number of arrests.

The 35-page report explains that in July most of the arbitrary arrests in Syria are carried out without any judicial warrant while the victims are passing through checkpoints or during raids, with the security forces of the regime’s four main intelligence services often responsible for extra-judicial detentions.

Every detainee is tortured from the very first moment of his or her arrest and denied any opportunity to contact his or her family or to have access to a lawyer. The authorities also flatly deny the arbitrary arrests they have carried out and most of the detainees are subsequently categorized as forcibly disappeared.

The report does not include those kidnappings and abductions in which the report was unable to identify the responsible party. The report also documents arbitrary arrests that were subsequently categorized as enforced disappearances.

Syrian regime forces have continued to persecute and target Syrian citizens in areas under regime control in connection with their political dissent and expression of opinions, despite the right to both being guaranteed by the constitution and international law.

The report also records random arrests targeting civilians, including elderly people in many areas of Daraa governorate over the deteriorating security situation, the residents’ rejection of the security presence of regime forces in the residents’ areas, and during Syrian regime forces’ storming of several homes in the besieged neighborhoods of Daraa al Balad and some Daraa city neighborhoods, with these operations being accompanied by looting and destruction of the homes’ contents.

Read Also: Opposition Calls UN to Use ‘Responsibility to Protect ’ Against Assad

As the report reveals, Daraa province saw the highest number of arrests in July, in conjunction with the military campaign carried out by Syrian regime forces against some areas of Daraa. In the context of cases in which individuals were released in July, the report records the release of at least 23 detainees held by the Syrian regime, all of them from Damascus Suburbs, from its detention centers in Damascus. The release was the result of a reconciliation process carried out by the Syrian regime in Damascus Suburbs, with the period of detention for most ranging between one and three years, within extremely poor conditions which included being subjected to torture, and enduring an almost complete lack of healthcare and medical care, and severe overcrowding, while all had been arrested without receiving any explanation of the reasons for their detention and without any arrest warrants being provided.