A new report has shed light on the damage caused to Syria over nine years and the amount that is need for the reconstruction writes Asharq Al-Awsat. 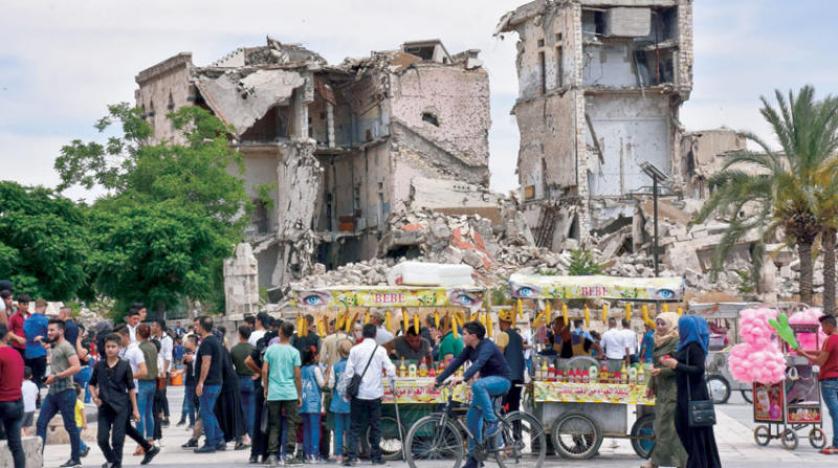 Total economic losses in Syria over nine years of war have surpassed 530 billion dollars, more than 130 billion dollars above estimates made two years ago by Syrian and international experts, according to research presented in Beirut on Wednesday by the Syrian Centre for Policy and Research. Some 40 percent of Syria’s infrastructure was also reportedly destroyed, with losses of around 65 billion, and a poverty rate of 86 percent.

As for human losses, the number of those who had died conflict-related deaths reached 690,000 people, including 570,000 of them killed directly as a result of the war, which has driven 13 million Syrians from their homes as displaced people and refugees. Some 2.4 million children in Syria are living without schools, which feature six different curricula in different “areas of influence” in the country. They make up about 35 percent of school-age children inside Syria, with similar numbers of non-enrollment in places of refuge outside Syria.

Rabie Nasser, the researcher who presented those numbers, told Asharq Al-Awsat on Tuesday that in light of these statistics, “it is impossible to talk about reconstruction before treating the roots of the conflict–most important of which is injustice, including political, social and economic injustice.” He added that, “the most important part of reconstruction is to transcend conflict. This is a long-term and gradual process of lifting injustices and opening up the possibility for society to participate in erasing the impacts of the conflict and building a new future.”

Two years ago, Russian officials spoke of 400 billion dollars worth of damages in Syria. There is no doubt that these new numbers pose a major challenge to any Syria reconstruction plan, especially in light of domestic conditions and worldwide economic crisis amid the coronavirus pandemic. As one researcher said, “these numbers move the idea of reconstruction closer to fantasy.”

The report, which was prepared by Syrian experts through deep work and relationships inside Syria, is part of a series addressing the impacts of armed conflict there between 2011 and 2019, particularly the social and economic situations, and institutions. It proposes alternative strategies for reconstruction, “based on dismantling conflict economics, developing social consensus and establishing fair and inclusive institutions.”

The conflict has led to the formation of different and fragmented economies “within a fractured state.” According to the report, the incentive systems in these new economics showed that one of the few shared interests among the forces competing for control, was the misuse of economic resources for the benefit of the conflict’s elites at the expense of productive economic activity. “The ingredients of the economy were transformed into sources of ongoing violence by destroying a large part of the capital, or reallocating it to conflict-related activities,” the report read.

The report estimated the economic losses of the conflict to be at around 530.1 billion dollars by the end of 2019, equalling 9.7 times Syria’s 2010 GDP at stabilized prices.

Syria’s population increased by 0.9 percent in 2018, and 1.1 percent in 2019, with the total population reaching 19,584,000 in 2019. The conflict caused the forced displacement of more than 5.6 million people searching for safety in Lebanon, Turkey, Jordan and other countries. The number of internally displaced people reached some 6.14 million last August, “the largest number of people internally displaced by conflict anywhere in the world.”

Syrians are continuing to “lose millions of years of education,” with 2.4 million children aged five-17 out of school by 2019. As one researcher said, “these current statistics represent a catastrophe because millions of children will suffer from a lack of skills and knowledge, in addition to the other impacts of conflict. The conflict has also left behind an inconsistency in curricula across Syria, due to the establishment of different educational systems in each region, according to the governing power there. There are six different curricula in use.” A similar number of children are out of school outside of Syria as well. “Some 24 million years of schooling have been lost for Syrians, and this complicates opportunities for advancement in the future,” the researcher said.

The overall poverty rate reached its peak in 2016 at 89.4 percent, then lowered in 2019 to 86 percent. The economic crisis in Lebanon only exacerbated economic conditions in Syria. The US’ “Caesar Act” is expected to be implemented in the middle of next month, which will bring additional burdens to the living and economic situation.