Regime officials have been quick to descend onto Khan Sheikhoun and congratulate the army and militias of their capture of the city, while homes and shops are looted writes Al-Modon. 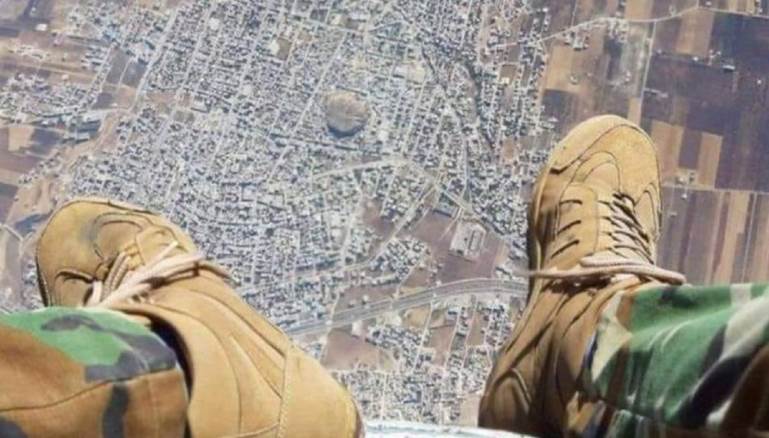 Russian and regime militias are continuing to promote their alleged victory in Khan Sheikhoun and the villages and towns of the northern Hama countryside, which over the last few days have seen intensified visits and tours by regime officials in the Hama governorate, government and security and military officials from the militias. Officials announced the start of the implementation of projects to restore life to the area and to open roads and facilitate the return of displaced people to their homes, according to Al-Modon’s correspondent, Khalid al-Khatib.

Promotion of the victory

Russian military police set up an inspection point just a kilometer away from Turkish observation point number nine, which is in the environs of the city of Murak in the northern Hama countryside.

Despite the Turkish point remaining, the militias promoted their victory in northern Hama in a deceptive manner, exaggerating the strength and statesmanship of the military commanders who led the land assaults. The militias in their propaganda focused on the capabilities of the formations and the extent of their participation in the battles and the stages of encirclement and attrition against the opposition. Their propaganda showed the fortifications, tunnels, hiding places and barricades of the opposition which did not prevent the militias from advancing and taking control. The militias focused their propaganda largely in the areas that recently came under their control, which had been under the total control of Hay’at Tahrir al-Sham. Their narrative was backed by the testimonies of loyalist civilians from the area.

An opposition military source told Al-Modon that securing control over the northern Hama countryside with this ease had not been expected by the militias because the area had held great terror for them over the past few years. The areas had been a launchpad for successful opposition attacks that had threatened regime strongholds in Hama city and loyalist towns in the nearby environs. The militias repeatedly failed in military operations to take control over the area and every time they were met with a severe response and were repeatedly drained on the al-Zalaqiyet and al-Ltamaneh fronts and others. According to the source, the militias taking control was not a victory, as it had not been a fair battle. As they advanced, the militias avoided fortified areas such as Ltamaneh and Kafr Zeitah and others and attacked al-Habbitt and Khan Sheikhoun, which are faraway areas, which the opposition had not yet fortified.

Through their propaganda, the militias are trying to affect the morale of the opposition and civilians in Idleb and to take advantage of their alleged victory to mobilize a new round of fighting and to raise the morale of their fighters and to cover up the heavy losses they have incurred since the start of military operations in May.

Militias prevented the displaced residents of northern Hama and loyalist areas from returning to their towns and villages and said that the area was dangerous and had not been cleared of explosives and mines. They continued to steal and loot civilian property, homes and stores in Ltamaneh and Kafr Keith and Murak and more than 20 villages and and farms. The regiments of the Tiger Forces and the Fifth Corps split the orchards that farmers had planted with pistachios and had not been able to harvest before being displaced.

The militias put most of the spotlight on Khan Sheikhoun, which was visited by regime officials and promoted the return of displaced residents to their homes and said that the services in the city and across northern Hama in general had begun gradually to return, including roads and rubble clearance, water, electricity and other basic services and public utilities.

The opposition says that the militias are lying and the civilians who are returning to the city, as the militias and pro-regime media claim, are loyalists, and that a large portion of them were displaced from various areas and were residing in Hama and had been gathered by the provincial council and transported in buses to Khan Sheikhoun. The Hama governor, Mohamed Hazouri, visited Khan Sheikhoun and attended the distribution of aid materials to residents returning to their homes.

Media activist Mohamed al-Hamawi told Al-Modon that the regime’s promises and promotion of the return of services to the city and the towns of the northern Hama countryside were lies. The repairs focused only on the international Aleppo-Damascus road from Murak to Khan Sheikhoun, with images of Bashar al-Assad placed on the bridges and roadsigns along the international road, at the entrance to the city and at other sites that were visited by official delegations. There had been no paving of the roads or clearing of rubble from any city or town. Militias had imposed a security cordon around the districts in Khan Sheikhoun that were struck by chemical bombardment and the militias will probably work to disguise marks of the crime, according to Hawaii.

The militias’ interest in Khan Sheikhoun is due to its position on the international highway, with militias pointing out that the operations to restore the road will continue behind the theoretical land advance towards Aleppo. The Transport Ministry has developed a plan to restore and repair the roads and bridges and has prepared comprehensive studies. The militias say that Khan Sheikhoun will be a main launchpad to take control over the international highway.