A new film by Syrian filmmaker explores what it is like to grow up in Syria under the rule of the Ba'ath party writes Zaman Al Wasl. 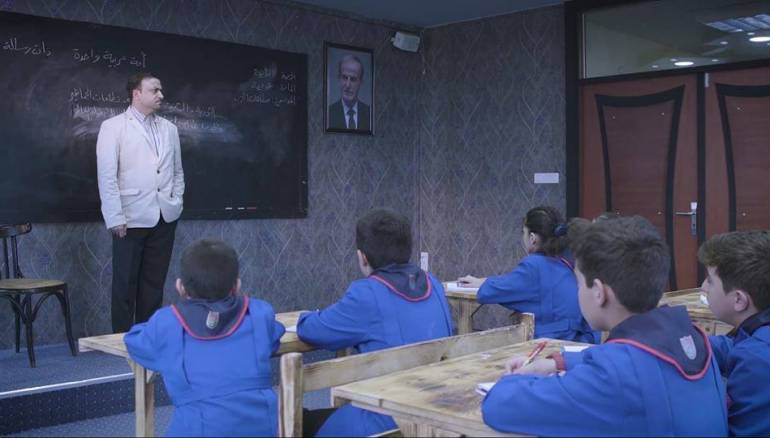 When students belonging to the ruling party were playing with a ball a picture of the regime is accidentally broken. The fun soon becomes a session of torture and abuse. Around the image of the smashed picture, the words “For Absurdism, Oh Vanguards” appears.

While the title of this film is reminiscent of “A Flood in Baath Country” by the late Omar Amiralay, the director Yaman Abantabli explains that the film of the late director is a documentary while his new film is a drama, but regardless of the genre, both are rooted in truth. He backtracked saying that Amiralay’s film is, without doubt, global by all standards. However, both films tell some of Syria’s pain, and if the late director were alive – he says – he would have been the first person to send him his film to show that the idea he worked on did not go to waste.

The young director stated that his film “For Absurdism, Oh Vanguards” is the story of his childhood and the childhoods of 20 million Syrians.

At the beginning of his asylum in Turkey, Antabli, 23, began a new artistic experience, in addition to his work in advertising, he was beginning to make several cinematic works, including “Sealed”, “Zaatar” and “Sahwa”. In late 2017, Antabli about deliberated making a film about certain slogans and ideas and the influence they have on children in their home lives, but he stumbled upon an old clip dating back to 2009 that shows the cruelty and violence of an elementary school teacher torturing her students.

In January 2019, Antabli started the film’s production through his own company, Darmisk Film Production, gathering about 30 children, 17 of whom were selected for specific roles, and some of whom had worked with him in previous films.

The director indicated that he was use to dealing with children in films and extracting what is innovative and distinctive about them, to create a convincing performance for people.

On the translation of the film to several international languages, Antabli said that the aim of the translation is to inform the world of Syria’s story, of what is happening in Syria, and why the country rose up against the regime. He previously made an English language film called “Thyme” that was not translated into Arabic.

The film was translated into the languages of countries hosting the most Syrian refugees and the countries most involved in Syrian affairs, so they would know, that aside from the bombs, oppression, arrest and daily death, why they escape and seek safety from the “normal Syrian life.”

It has been translated into five languages, English, Swedish, German, French, and Turkish.

Antabli aspires to create a true independent Syrian film industry, one similar to what the late Omar Amiralay, Mohamed Malas and other Syrian filmmakers were trying to create. A creative cinema that expresses and showcases their reality.