If we confine our choices to leaders with broad appeal in the Arab and Islamist mainstream — excluding both al-Qaida and Kurdish leaders — we get the following five, listed in order 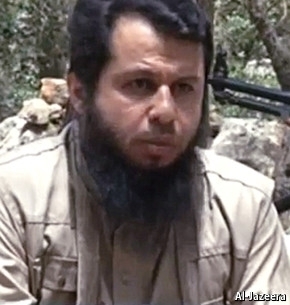 If we confine our choices to leaders with broad appeal in the Arab and Islamist mainstream — excluding both al-Qaida and Kurdish leaders — we get the following five, listed in order.

1. Hassan Abboud, the general head of the Islamic movement of Ahrar Al-Sham, spearheaded the joint position of what some are calling theIslamic Alliance, but which is looser than an alliance of mainly northern-based militias. They have rejected the SNC and US backed exile groups. Al-Nusra was one of the groups that signed the alliance, along with #3 and #4 below. So far this is.

2. Zahran Alloush, the general Commander of Jaysh al-Islam or Islam Army, a group of more than 50 brigades. He is the son of a Saudi-based religious scholar named sheikh Abdullah Mohammed Alloush. Syrian authorities released him from prison in mid-2011. He was incarcerated for his Salafist opposition activities. He states that the external opposition does not represent him or his group and that there is no chance at negotiations with the regime. His Islam Army flies the black flag and not the Syrian flag.

5: Bashar Al-Zoubi, the Commander of Liwa al-Yarmouk in the south of Syria around Deraa.

Taken together, these leaders represent not even half of the insurgency. The top five are not enough to run the rebellion, but they are either major actors in their core areas or very big nationally, or both. A small group on the national level can be a superpower in its own hometown. There are many more powerful leaders in Syria. We look forward to adding and correcting.

These are people who have significant influence over the insurgency. They are swing voters.

Over the last several months, the insurgency has undergone a “Darwinian” shakedown. Powerful leaders are emerging and smaller militias are lining up with the larger sharks. All the same, we are only at the beginning of this process. The opposition remains extremely fragmented and volatile.

Any discussion of Geneva II talks to end the Syrian conflict will be sterile without these commanders at the table. The top four say they are unwilling to sit at the negotiation table with the regime. In fact, their main issue with the National Coalition is that the NC is considering negotiating with the regime.

Abu Bakr al-Baghdadi, ISIS, according to US gov.

It is hard to imagine any of them backtracking on this position in the near future.

If one is considering military might alone, one must add the head of ISIS – Abu Bakr al-Baghdadi. In military terms, he is stronger than Bashar al-Zoubi, our #5. But he doesn’t have appeal outside the Islamist hardline segment. So here we go:

·         Sipan Hemo, commander of the Kurdish Peoples Defence Units (YPG) in Syria – See an interview with Hemo. The YPG is the military arm of the PYD (Partiya Yekîtiya Demokrat) the leader of which is Salih Muslim Muhammad. This is the Syrian branch of the PKK. It has been battling Nusra and ISIS over the last several months for control of the North-east.

·         Abu Sayeh Juneidi of Farouq Brigades, one of the largest and well-known units of the FSA (Homs). It placed itself under Suquor al-Sham commander Ahmed Abu Issa in Sept 2012. (Farouq seems weakened of late). Abu Sakkar, a Farouq commander, notoriously posted a video on the internet showing himself cutting organs from the dead body and eating them. He called rebels to follow his example and terrorize the Alawite sect.

·         Mohammed al-Khatib of Furqan Brigades, active west of Damascus down toward the Golan. Also not irrelevant.

·         Ziad Haj Obaid commands Ahfad Rasoul with two others. The name meaning Grandsons of the Prophet. He is on the Arms Committee for the Supreme Military Command. Much of Ahfad’s funding came from Qatar, which may explain its recent weakness.

Abdul Qader Saleh is powerful as things stand today, but should Aleppo fall entirely into rebel hands and should Liwa al-Tawhid remain dominant there, Abdul Qader will become powerful indeed. Aleppo is the capital of the North and it and its suburbs include about half the population under rebel control.

Abdul Qader Saleh’s relationship with the Turks. One story about the fall of Aleppo centers around the defection of Mohammad Miflih, who at the time was head of air-force intelligence in Aleppo. Miflih was infamous for massacring protestors in Hama early in the revolution, so when he decided to defect, he knew that he wouldn’t be received very well by the opposition.  The story has it that Miflih coordinated his defection with the Turks, who offered to provide him protection but in return Miflih had to allow the rebels into the city. In the meantime, the Turks had the rebels assemble their forces and entered the city, starting with the Salahaldin neighborhood. They named the battle for Aleppo – Furqan. Here is the video of that announcement from August 2012. It shows a group of rebel commanders including Abdul Qader Saleh and a Nusra commander.

Bashar Zoubi, Liwa Yarmouk: This militia is not huge, Zoubi says around 5,000, but if you want a southern faction, it’s probably the biggest. He seems much less Islamist & more SMC/Western linked than the brigades that have linked up with Zahran Alloush’s Islam Army around Damascus. The Deraa front in general seems less Islamist, with weapons coming in from Jordan and Saudi. The US, Jordan and Saudi are working together to avoid building up Islamists. Although a Daraa source suggests that many of the Daraa militias are placing themselves under Zahran Alloush since his dramatic announcement of the formation of the Army of Islam, Liwa Yarmouk and several other power hitters around Deraa have not. See this list for those that have joined Islam Army http://justpaste.it/d81t – I think a few more have joined since.

Hassan Abboud of حركة أحرار الشام الإسلامية ‎  Ahrār ash-Shām, meaning “Islamic Movement of the Freemen of Syria.” It is the principal organization operating under the umbrella of the Syrian Islamic Front.[1]  or SIF. On Sept. 24, 2013, Aboud spearheaded the formation of what was called the Islamic Alliance. Liwa al-Tawhid, Liwa al-Islam and Suqour al-Sham were included in this loose “alliance,” as well as Jabhat al-Nusra, the al-Qaida linked group.

Zahran Alloush, Liwa al-Islam, who founded the Islam Army a week ago. He peaks of the resurrection of the Omayyad Empire and cleansing of the majous or crypto-Iranians: Rafida (Shiites) and Nusayri (Alawites) from Damascus (minute 5). He does not have much faith in democracy, claiming that a committee of Islamic scholars will decide on the form of government and the role that minorities will play.

Here is the video of the formation of the Islam Army. Alloush was not at the conference. His deputy took the pledges of allegiance of the 49 other commanders on his behalf. He was not in the group photo. No point in having your top commander killed or captured.