The prices in the markets of Kfar Nabel, a city of over 30,000, were affected by the repeated closure of the Bab Al-Hawa crossing, around 100 kilometers from the city 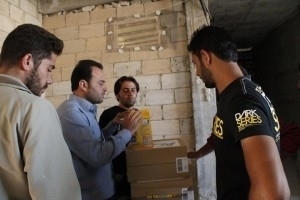 From mid-January until the time of this writing, the Bab al-Hawa border crossing between Turkey and Syria has been closed and opened arbitrarily as a result of the explosion of two car bombs that claimed the lives of more than 16 people. Cars and trucks line up for several kilometers before the crossing on both the Turkish and Syrian sides of the border. Only individuals and a small number of cars and trucks are allowed to pass through each day. The two explosions is a reflection of the struggle inside Syria between the Islamic State in Iraq and Syria (ISIS) and other factions of the armed opposition since the beginning of 2014.

Syria and Turkey share a 900-kilometer border that includes several border crossings. The most important of which are, from west to east, the Kasb crossing controlled by the regime, followed by Bab Al-Hawa and Bab Al-Salama controlled by the Islamic Front,  Jarablous and Tal Abyad controlled by ISIS, and finally Ras Al-Ein and Qamishly, controlled by the Kurdish opposition.

The closure of the crossings has severe effects on the economic wellbeing of Syrians, particularly in regions controlled by the armed opposition in the northern half of Syria. These regions have relied heavily on goods imported from Turkey since the agricultural and industrial sectors have been hit hard by conflict.

The prices in the markets of Kfar Nabel, a city of over 30,000, were affected by the repeated closure of the Bab Al-Hawa crossing, around 100 kilometers from the city.

Ali al-Haroub, 45, a food product merchant, said that over half of his goods come from Turkey. He said that the prices of margarine, oil, rice, tomato molasses, and eggs increased by about 10 percent in the three days after the closure of the crossing in January 2014. A month later the prices went up by more than 20 percent.

Al-Haroub believes that the price increase isn’t caused only by the closure of the crossings.

“Merchant greed plays a large role as well,” he said, explaining that many merchants increase their prices every time the nearest crossing closes, even if only for a few hours. “There is no mechanism in place to monitor prices. There is no sign of government institutions in places outside of its control,” he added.

Household product merchant Abdel Karim al-Hounayny, 60, and electrical appliances merchant Mohammad al-Abboud, 65, spoke about a 15 percent price increase of parts of their stock coming from Turkey. Most of these products are made in Turkey or China.

Mohammad al-Mansour, 30, sells chicken imported from Turkey. He said that the cost of chicken has increased by more than 30 percent over the past three days due to the Bab Al-Hawa closure on January 20, 2014. He predicted more price hikes or stock depletion from the markets. In fact, as of February 20, 2014, a month after the closure, chicken has practically disappeared from the market after its price went up by around 50 percent.

The frozen chicken imported from Turkey is most likely Turkish or Ukrainian in origin, and its cost ranges from around 50 to 200 Syrian Liras per kilogram. It is the only luxury many Syrians can afford after Syrian chicken exceeded 450 liras (around 3 US dollars) per kilogram, a severe price hike from what it was prior to the uprising when it cost at most 150 liras (1 dollar) per kilogram. Fruits and vegetables are now referred to as being from Turkey or Syria rather than whether they are good or bad quality.

Fruits and vegetables from both countries are usually available in adequate quantities in Kfar Nabel’s markets. If one country’s produce disappears from the market, the other’s price rises significantly. Vegetable seller Ahmad al-Bashir, 35, said the closure means Turkish potatoes and tomatoes haven’t been available since the crossing closed. He added that this has led to price increases of Syrian potatoes from 90 liras (60 cents) per kilogram to more than 120 liras (80 cents).

Relief activist Hamza al-Hazzaa, 31, said the crossing closures have negatively affected the emergency relief bakeries due to the difficulty in obtaining yeast, since it is not on donor lists of emergency relief supplies. He noted the leniency of the Turkish government toward relief organizations, allowing them to cross into Syria without adhering to the closures.

Tension ran high in the border regions in late February. The refugee camp at the Bab Al-Salameh crossing near the Azaz region was attacked on February 20, leaving more than 20 dead. Four days later another explosion targeted the Ourint hospital in the border town of Atama, leaving at least 12 people dead.