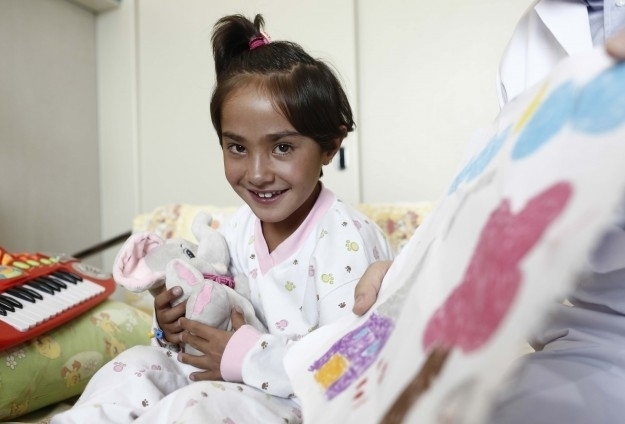 "Her lips were dark purple, her eyes were bloodshot and she was very weak when we arrived in Suruc," says Sewili Hamy, sitting beside her 8-year-old daughter, Besma, in an Istanbul hospital bed.

Besma is just one of thousands of Syrian children caught up in the unforgiving conflict in her home country who have fled to Turkey.

Together with her mother and three siblings, she had to walk 12 hours from the war-torn town of Kobani to cross the Turkish border near Suruc, a district near the southern city of Sanliurfa.

Besma's story is harder than most; a shy and quiet girl, Besma suffers from a hole in her heart, a condition she has lived with since the age of two and which demands special care.

"I mostly carried her in my arms. She was affected by the journey so much. We were falling down when we did not have power to walk. She was always crying,” Sewili, 35, says.

“It was very difficult for me,” she adds, looking at her daughter.

Also known as Ayn al-Arab – Kobani has been the scene of fierce battles between Kurdish groups and Islamic State of Iraq and Syria militants for the past three weeks.

More than 180,000 Kurdish refugees have fled into Turkey since the militant group launched an offensive on the town in mid-September. Control of the key town is currently on a knife-edge between its Kurdish defenders and the ISIS besiegers.

“She needed an operation. Because of the war in our country and financial difficulties, we couldn’t make her undergo surgery,” says Besma’s 36-year-old father Mustafa, who was a farmer before the war.

Besma and her family stayed in a refugee camp in Suruc for 10 days. When her condition deteriorated, they decided to go to Istanbul for treatment with the help of Suruc governor Abdullah Ciftci.

“She underwent a small surgery when she arrived here first. She will undergo another one next week for a permanent treatment,” Mehmet Eren, a Siyami Ersek Hospital official told the Anadolu Agency.

"Besma is better now," her mother says, smiling. "She is playing with toys that were given to her. She is smiling. She feels secure here."

Still, she is worried for her daughter and is waiting for her to undergo the second surgery as soon as possible and then recover.

“If everything goes well, Besma will be discharged from hospital within three weeks,” Eren said.

Nevertheless, the future is still dark for the Hamy family.

In response to a question on where they plan to go or what they plan to do after Besma's surgery, Sewili says – her eyes filling with tears: “We don’t have any place to go. I really don’t know.”