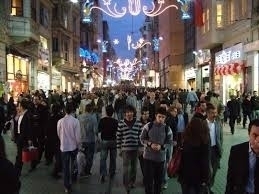 The Osmanbey Market is considered the largest and most important commercial center in Istanbul, where wholesale and retail shops are clustered in an area famous for clothes, fine fabrics, and Turkish threads. Because this market depends primarily on Arab customers from Lebanon and the Gulf region, the Turkish traders began hiring Syrians to deal with the customers.

Mustafa – a graduate of the Faculty of Medicine at Damascus University whose dream was to continue his professional training in general surgery – was forced to escape Syria because the Syrian security forces were trying to arrest him. Mustafa arrived in Turkey and is looking for a job in the Osmanbey Market because the Turkish medical regulators did not recognize his medical license. “A medical degree from Syria is not recognized in Turkey due to numerous fake degrees that eroded the credibility of college degrees from Syria,” Mustafa explained.

Nowadays, Mustafa works at a wool and silk thread store that supplies threads to textile factories in the Arab region. He works 10 hours a day with one day off per week and earns 2,000 Turkish Lira. Mustafa pointed to a grill restaurant next door where two young Syrian men, Omar and Nader, welcome Arab customers and take their orders.

Omar, Nader, and Mustafa refused to be photographed. Omar said that he once owned a fabric shop at Harika Market in Damascus; he earns 2,500 Turkish Lira these days, which he says is a relatively acceptable amount. According to Nader, Turkish traders started to rely on Arab employees because Turks often speak neither English nor Arabic, which hinders their communication with Arab customers.

Mustafa said that the Osmanbey Market provides a better opportunity to make money than other places because some stores pay bonuses to their employees for material sold. He added that a number of shops even increase the salary during high seasons when many Arabs visit the market.