"She was put in the services of ISIS to satisfy the whims of its members, although the charge which it leveled against her was nothing but a pretext to arrest her” 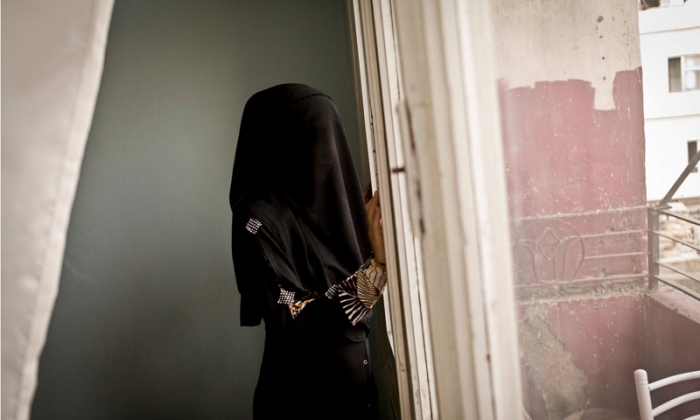 The woman “RA” did not know where fate was taking her as she was pushed violently by her captors – dozens of members of the Islamic State group who had vowed to kill and crucify her.

It appears to be a widespread issue for the women of Deir-ez-Zor, and the areas where the Islamic State organization has control, according to activists in the province. Women who are imprisoned do not know the nature of the accusations leveled against them, or if they have undergone a fair trial, or even the extent of the credibility of the judges who presided over their cases. Activists meanwhile ask: Was this woman left a chance to defend herself before the verdict was issued?

“Girls Kidnapped to be Made Slaves”

Mohamed, a witness to RA’s arrest, told Enab Baladi how several cars raided a house in the Deir-ez-Zor countryside and arrested and blindfolded the woman, under the accusation of collaborating with the Assad regime against the organization. “This led many people to insult her and call for her death, and caused her family to leave their area of displacement,” he said.

Mohamed explained he wanted to “expose the practices of the Islamic State group and reveal what women were subjected to in environments where extremist factions prevail.” “Omar” (a pseudonym), one of RA’s relatives, told Enab Baladi that his family member had been kidnapped and her reputation tarnished. He added: “She was put in the services of the organization to satisfy the whims of its members, although the charge which it leveled against her was nothing but a pretext to arrest her.”

Omar said that women and girls “are kidnapped to be made slaves in the houses of foreign fighters.” He described what was occurring as “painful and shameful," and explained how his relative was arrested more than a year ago in the eastern Deir-ez-Zor countryside, indicating that news of her execution had been rumored for some time, while all the attempts by her family to discover her fate ended in failure, “in addition to the shame that has followed us and the changing view of local society toward us.”

Despite all she had endured and rumors of her death, RA told Enab Baladi about her imprisonment before she left the group’s prisons and arrived in Turkey two months ago. She said she was transferred along with hundreds of Syrian women between different prisons in the cities of Al-Mayadin, Albu Kamal and Al-Shaddadah, adding that some were transferred to Mosul to “become slaves in the group’s guesthouses.”

Although many people know of the existence of special prisons for women in different cities under the Islamic State group’s control, Ramez, a displaced person from the city of Deir-ez-Zor, said that the phenomenon was not linked only with the organization. “Most of the armed factions, whether in the city or in the countryside, have secret prisons, including the sharia authority and the Nusra Front.”

The young man told Enab Baladi that the city of Deir-ez-Zor housed more than 10 prisons belonging to different factions. He added that “most of the prisoners were working as sabaya for the factions.”

Ramez said that the title “sabaya,” an enslaved woman, is not connected only with the Islamic State group, but that slave markets had spread throughout the area. He added that “other organizations were doing the same thing. The Islamic State group was unique in declaring them and revealing them to everyone clearly and publicly.”

Abu Khalid, a fighter for one of the factions in the eastern Deir-ez-Zor countryside said that areas like Al-Mayadin and Al-Shaddadah had witnessed the arrival of dozens of prisoners which the Islamic State group and before them the Nusra Front had presented to foreign fighters. He added that the kidnapping affected Arab women of the Sunni faith, and included those the group captured after raiding their villages in eastern Syria.

Abeer, a nurse in the Deir-ez-Zor countryside who was displaced to Raqqa before Islamic State control, told Enab Baladi about her period working in the Islamic State areas. She said she was informed about the situation of a number of women captured from different areas in Syria.

The nurse said, “Some of the women were attending the hospital, and most of them were working in the houses and guesthouses and even in the military bases.” She said that “More than once I had to treat them after severe violence, or perform abortions,” describing what she witnessed as “shocking scenes.”

The nurse spoke about the nature of the lives of these prisoners, and added: “You would find before you nearly naked women wearing nothing but shorts, serving the organization’s fighters and being beaten and insulted.”

Missing Stories of the Arab “Sabaya”

Unlike the Yazidi “sabaya” taken by ISIS, whose situation has found broad international sympathy with media publishing stories of their torture, the stories of Arabs have remained folded in darkness and prisoner to the concepts of honor and reputation.

Social researcher Taha al-Taha, who saw that there were Arab women and girls suffering injustice equivalent to what the Yazidis endured, said ISIS does not distinguish among them in terms of ethnicity, religion or language, and added that many of the stories of the Arab sabaya had been kept secret and denied by families and society — as well as primarily by ISIS.

“These women and girls are oppressed twice, first in being captured and made into sex slaves, and second when society refuses to acknowledge their suffering and give them justice,” Taha said. He added that the concept of justice “is not only about exposure or restitution, but is connected with reputation and the way the women are viewed who have fallen into forced captivity and made by their enslavers to do things they are not responsible for.” He concluded by saying: “We should consider them to be fighters and symbols of resilience.”

Dozens of girls and women remain imprisoned by the organization, some of them lost after their arrest and whose fates are still unknown, and others who bear stories no less tragic than RA’s.