With Aleppo characterized by its vibrant textile industry, which contributed about a third of Syria's total industrial production, what will the devastation of the "economic capital" mean for the country's economy in the long-term? 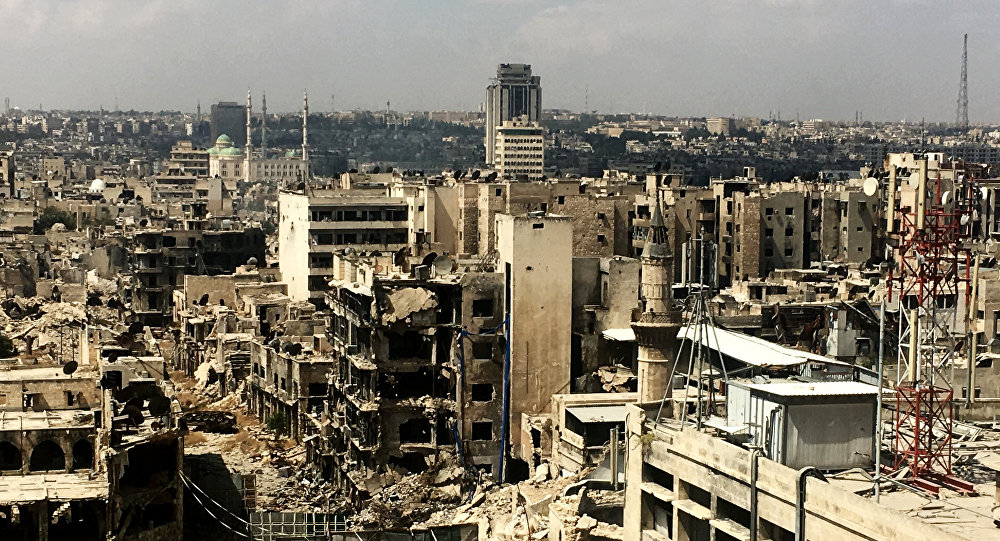 Before the Syrian revolution, Aleppo was known as "the economic capital of Syria." The Aleppo chamber of commerce was established in 1885, making it one of the oldest of its kind in the Middle East and the Arab world.

The chamber noted in 2012 that the contribution of the local economy of Aleppo city to Syria's gross domestic product was about 24 percent, putting it in first place among all cities in terms of contribution to the country's GDP.

As for the industrial sector, Syria knew nothing but Aleppo. The city was characterized by the textile industry which contributed about a third of Syria's total industrial production. Syrian manufactured exports produced in Aleppo were about 50 percent of total national exports.

In 2011, the volume of exports in Shaykh Najjar, an industrial city in the north of the province, totaled about 166 billion Syria pounds and was responsible for about 36,000 jobs. Given Aleppo's major industrial importance, it employed about 50 percent of all industrial workers in Syria.

Regarding the commercial relationships between the city and other countries of the world, the Aleppo chamber of commerce said that the value of exports which it contributed to in 2011 was about 452 million US dollars, after it reached 508 million dollars in 2010.

The free zone in Aleppo contributed to the development of trade through 114 investment projects in the commercial zone alone, which secured about 2,000 jobs.

The tourism sector in the city comprised an important source and mainstay — and not only in the modern era. "Khans," or luxury hotels, located in the Aleppo old city received traders, manufacturers and businessmen in older times. The city of Aleppo had 107 hotels in 2010.

As the city was a center for trade and industry, it had to be a large center of attraction for investment and the focus of attention for investors, as the city mediated between the agricultural production areas and sea export ports and land border crossings with neighboring countries, in addition to its position in the textile industry, and in traditional industries like clothing, soap, natural silk, gold, food and others.

Agricultural production ensured the availability of raw goods for manufacturing such as cotton, and all types of seeds. Aleppans were also highly skilled, with the workforce characterized by its variety and low wages in comparison to neighboring countries. For that reason, Aleppo city attracted investors, with about 21 government and private banks present with branches spread throughout the city to serve this major economic activity.

According to a study issued by the Syrian Center for Policy Research, the losses of the Syrian economy have reached 255 billion dollars. This means that Aleppo's share of economic losses could be about 65 billion dollars or more.

Industrial prosperity has vanished in Aleppo city, and the factories have stopped. Those that have not been destroyed have been shut down because of looting or the shortage of power or the lack of security on the roads.

Agricultural production has been incinerated by barrel bombs which regime forces drop, backed up by Russian air strikes. The production of wheat has been reduced by a rate of more than 20 percent of what it was in 2010, and the rate of livestock by 30 percent in cattle, 40 percent in sheep and goats, and 50 percent in poultry. The livestock which has been destroyed represented 20 percent of the rural workforce, as sheep, goats and chickens were important export commodities.

The international sanctions on the regime have contributed to the reduction in the value of the Syrian pound from 50 pounds to the dollar before the war, to 500 pounds to the dollar currently. This has led to an increase in inflation at high rates reaching 400 percent — and so poverty still awaits those who survive as rates have increased to 90 percent of the people in Aleppo.

Because of the constant bombardment and the collective slaughter by regime forces in Aleppo city, financial capital has fled the city. A good deal of this capital has settled in the Turkish city of Gaziantep.

Aleppans have launched a number of investment projects in the Turkish city, such as manufacturing oil and soap and textiles, in which many Syrians and Turks are employed.

As a result of the ongoing violence in Aleppo, normal professions have disappeared and new professions have appeared appropriate to the disaster, such as selling and transporting water to homes in Aleppo, as the city has suffered from a water crisis for two years. Water wells have appeared in all Aleppo's districts, and so there is no longer a district without a well or two. Some individuals work on sending this water to homes to earn a living. Trade in electricity generators has also spread because of the constant power cuts.

If the destruction were to stop today, how many years would Aleppo and Syria as a whole need to revive again?

Early in 2014, a report issued by the United Nations Relief and Works Agency estimated that it would take 30 years for Syria to return to the economic levels it was at in 2010.