Zaman al-Wasl describes a city paralyzed by fear, where young men go into hiding to avoid being arrested and tortured by government security, or escape to the countryside to die on the front lines fighting regime forces 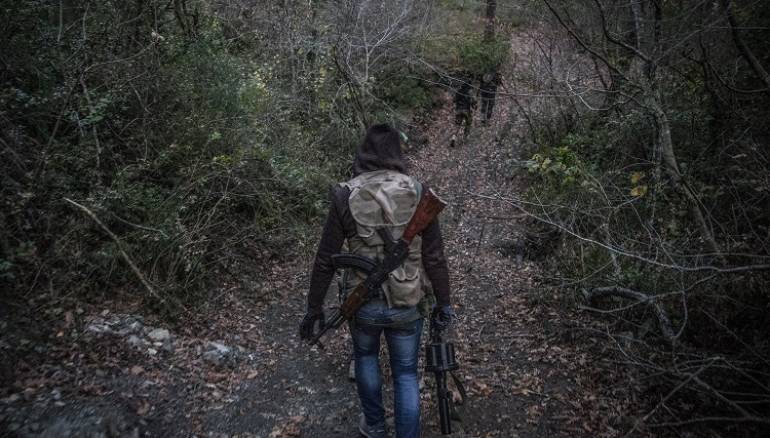 After joining the Syrian revolution in its first months demanding democracy and dignity, rebels of the coastal city of Lattakia who haven’t fled for Europe are now either fighting in the provincial countryside or are hampered down in the city.

The many massacres which took place in the city of Lattakia, including the Al-Olabi massacre, encouraged young local men to continue their struggle against regime oppression by joining factions of the Free Syrian Army.

Although many were killed or escaped the battlefields for Europe, most kept their word to continue their fight to overthrow the Syrian regime.

“My brother was killed in the battle of Dorin [Mountain]. I had had many injuries, but I would not leave my [army] till achieving the freedom we went out to obtain or [until I die],” Abuo Khalid, a sports teacher, told Zaman al-Wasl.

Fighters of Lattakia have participated in the battles to capture the Turkmen and Kurds Mountains, and have fought in Haffa and other battles in the city's countryside.

In the city of Lattakia the story is different, as young men who did not leave for the countryside sought asylum in Europe, while those who could not do either found themselves fleeing or imprisoned in their own homes to avoid mandatory conscription in the Syrian Army.

Zaman al-Wasl contacted a student in his fourth year of university who lives a state of perpetual fear, which has forced him to stay at home. He said he fears making phone calls or keeping an account on social media in his real name.

He explained that he refused to leave the city because he wanted to finish his studies, but when his face appeared in a demonstration video which surfaced on YouTube, he worried about arrest and decided to stay at home and abandon his university.

“We are like prisoners, we cannot see the sun,” he said, adding that young men are “at risk of detention if the security forces managed to discover [our] whereabouts. That’s what happened to my friend two years ago, and he died under torture a few months after detention.”