Holding 7,000 books, the new facility in Yelda is providing education and solace for people trapped by siege, Ayn al-Madina writes 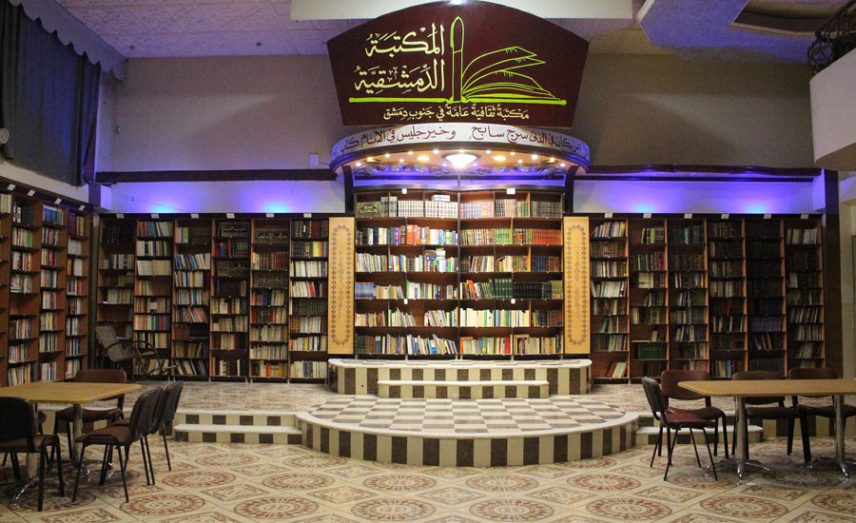 The shelves of the Damascus Library in the town of Yelda, south of the capital, are stacked with thousands of elegantly decorated books.

The place appears clean, with bright colors that contrast with the colors of the floor, the way the books are arranged, and the carefully distributed lighting. The quiet is the most important feature that induces you to visit the library, as you can sit at one of the tables and drink a cup of coffee. The place has been turned into an excellent refuge and an outlet to go and read.

In front of a desk where there are books and some papers gathered, Atef Abu al-Khair, head of the Damascus Library, seems happy with what has been achieved in the “palace” that has come to include thousands of books thanks to the efforts of the area’s residents. “This work today is bearing fruit thanks to the efforts of young volunteers, and I cannot thank them enough,” says Abu al-Khair.

The policy of siege, which had been carried out by regime forces against rebellious cities, has not prevented the residents of Yelda from raising the slogan of “reading is life,” on their newborn project, in the belief that reading is necessary to develop skills, open new horizons, raise intellectual levels and spread awareness among various segments of society.

Abu al-Khair discusses the beginning of the project which he had dreamed of achieving for years: “The idea was in our minds for a long time, but the circumstances and difficulty of securing the books and the location were all reasons that prevented the program’s launch.”

With the improvement of the circumstances, those in charge of the project transformed the Civil Registry building in Yelda into a large library, one of the largest in the areas outside regime control. Abu al-Khair turned his attention from law and registering divorces and marriages to a desire to change the situation and strengthen the role of culture and learning… in the belief that “the gun not protected by thought is destroyed and not rebuilt,” as he put it.

The Damascus Library team worked for months to clean the Civil Registry building and to prepare the hall and sort and arrange the books, and distribute them in an orderly way. The team adopted a computer program to make it easier for people to search for books to find them.

According to its director, the library contains about 7,000 books in a variety of subjects and in a number of languages, and includes 16 sections: Sharia scholarship, politics, law, philosophy, psychology, history, geography and computing, in addition to a number of cultural and scientific magazines.

The library, which opened at the end of December, has received more than 2,000 visitors, who entered and browsed its books. Most of them were under 25 years old, which is good, as the library’s director sees it, saying: “It is expected that the conditions of war and siege which the city has seen would make it hard for residents to read and study, but surprisingly the number has continued to rise every day.” Those in charge of the office are responsible for setting up new activities to attract different age groups.