Ayn al-Madina explores the desperate situation of some displaced Syrians 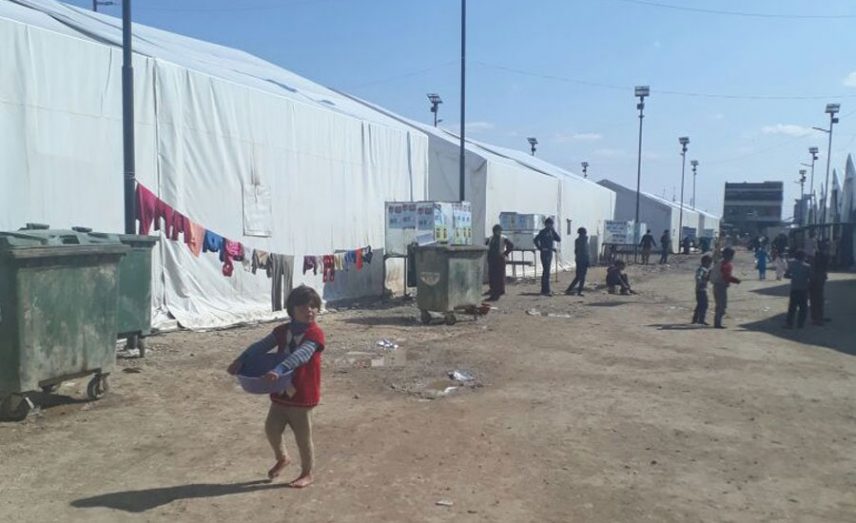 I spoke with Mona after I learned that she had sold her 6-month old son for 1 million Syrian pounds. The buyer was a barren woman who was unable to have children and the seller was one of the inhabitants of the Al-Shabiba camp, a place where people surrender their dreams and bury them forever.

The witnesses would be giant white tents set in three rows, if they had memory to record what was said inside, or if they could sense the concerns of those who inhabit them, see the residents shrinking in on themselves and looking at the sky in search of a solution, as the Syrians do every night. Memory becomes a burden and nostalgia daily life, and counting the days a new obligation.

We are not speaking here about one of the Nazi concentration camps, but about the Al-Shabiba camp in Azaz, which is composed of 20 tents offered by the Qatari Red Crescent, with residents varying according to the seasonal northern migrations. A number of international and local NGOs coordinate in serving it under the supervision of the local council in Azaz.

In Mona’s story, some people intervened to stop this folly, and returned the child to his mother and secured work for her in the camp on the outskirts of the city for $100, so that she did not suffer the need that she says pushed her to sell her son. I asked her about her family, and she said that they had not acknowledged her since she married her cousin against their will. Her husband died later in the fighting.

What the camp is enduring is nothing but the result of the tragic situation of its inhabitants. They reached what can be described as a shore of safety with pale faces, exhausted bodies and empty pockets. Most of them had used human traffickers who had facilitated their arrival to this point.

Those responsible for them are a group of humanitarian organization workers who are trying to lighten the burden of the displaced people after it became clear to everyone that it would be impossible to end this suffering in the foreseeable future.

The “Mosuli” mother will not forget Deir Hafer

In the Al-Shabiba camp, I met Al-Hall Ahmed, a displaced person who came from Mosul along with a large number of family members, including young men, women and children, after Turkish officers in the Bashiqa camp in northern Iraq advised them to head to this area for them to enter Turkey later.

Abu Ahmed crossed hundreds of kilometers over areas under the control of the Islamic State (ISIS), as have tens of thousands like him from Mosul, Kirkuk and Tel Afar. They survived the bombardment of the international coalition, but they lost one of their children when they crossed a minefield planted by ISIS. They buried their 10-year-old son in Arab territory and moved on.

“We buried him to the north of Deir Hafer,” his mother would repeat in case she forgets where her son was buried.

They reached the city of Azaz during a snowstorm, which completed the tragic scene, and there they understood that their long journey would end with closed doors and that all they had worked for was just a mirage. Abu Ahmed sits in the tent, wishing he had not been born to endure these days.

In another trip to Al-Shabiba camp, I met with a young man named Mohannad, who had just come from the countryside of the city of Manbij after fleeing areas under the control of ISIS. Mohannad did not express a single word, but merely moved his eyes in every direction, shivering as if with a fever while clasping his right hand in his left as if afraid someone will steal one of them.

His friends say he is afraid that ISIS will come down upon them from the sky to cut his head off because he fled from the areas under their control.

No one can convince him that they are very far away and cannot hurt him. He even thinks that everyone he doesn’t know is one of the group’s members staying hidden until the right moment. He raves constantly with the names of women and fighters he knew in his region. All of this is during the day – and so how will his nights be, and what are his nightmares like?

Psychologists may have a lot of work to understand the Syrians after all these horrors. Every Syrian has his or her own story and tragedy.

Mona, when I asked her about the reason for what she did, said that she “loves him”, her husband that is. I did not expect a more convincing answer than this. Like myths, Mona’s story had to end with news which I worked hard to confirm. The woman who had purchased the child became pregnant unexpectedly after she returned the child to her mother.