As tensions between Iran and the United States increases, Syria is stuck in the middle get pulled apart from both sides writes The Syrian Observer. 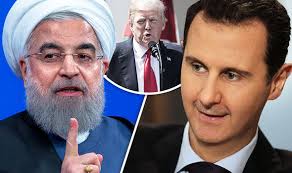 Relations between the United States and Iran have not been settled since the overthrow of the Shah of Iran in 1979 to this day. The first crises between the two countries began when a group of Islamist students in Iran stormed the American embassy and held 52 Americans from the embassy as hostages for 444 days, from Nov. 4, 1979, until Jan. 20, 1981.

A proxy war continued between the two countries, before the American military presence in Iraq presented a major opportunity to the Iranians to understand the American mentality up close, and to learn the Americans’ red lines, the ways they make decisions in military matters, the relationships between American institutions, and the extent to which American public opinion influences political decisions.

Iran learned how to simultaneously present itself as both a useful and a hostile party to the Americans in Iraq. It arrested Americans of Iranian origin and carried out bombings to destabilize Iraq and supported terrorist groups to weaken the American presence and to make it look like it was failing in its mission. Then it would work with it indirectly in the political process and in forming Iraq’s governments in a way that—in the media—served the Americans in achieving stability. But at the same time, participants in these governments were carrying out Iranian interests.

Its activities then moved to Syria after the Syrian revolution broke out in 2011, investing money and men in the country whose leadership had brought it to the abyss. Iran sent fighters from the Iranian Revolutionary Guard as well as its proxies in Lebanon (Hezbollah) and Shia militias from Afghanistan and Pakistan to fight alongside Assad and prevent him from falling.

This move did not please the administration of Donald Trump, who had originally believed that Iran was the biggest country sponsoring terrorist, and therefore its extension into Syria would strengthen its positions and the positions of its ally Bashar al-Assad, who Trump had hoped not to have to engage with in any clash.

The Iranian-American talks around the nuclear issue presented another chance for the Iranians to sit directly with the Americans and to learn more about how they could impose their priorities on the world’s most powerful country. During the negotiations, Iran seemed as if it was the superpower, taking advantage of the previous administration’s desire to reach a nuclear deal without looking deeply at the other crises that Iran was causing in the region. It seemed that the relationship served as consensus around the nuclear deal in exchange for Iran taking control of Iraq, Yemen, Syria, Lebanon and Gaza.

From its first day, the current American administration announced that it wants the following from Iran: To return to being a normal country in the region without intervening in the affairs of neighboring countries; to stop support for terrorists; and to offer real and international guarantees with regards to its nuclear and missile programs—and Iran has rejected this from the first day.

The American administration decided to withdraw from the nuclear deal and to begin a plan of applying heavy pressure through economic sanctions, described by American officials as the strongest of their kind, which have recently included preventing the export of Iranian oil.

Iran has resorted to its usual style, through “defiant” military acts via its proxies (Hezbollah in Syria) or through its direct forces. The United States then sent military reinforcements to the Gulf area to respond to the increasing Iranian military threats to the region’s security.

Today, in light of the increasing military tension between the United States and Iran, the American administration should be aware that it is putting pressure on a country that knows the minutia of matters in Washington and is aware of all the details of internal politics there. Meanwhile, the Americans do not have this sort of influence over Iran domestically and over the decision-making mechanism there because of the closed-off religious rule, which believes that the survival of the regime is more important than the survival of the people. This is why we see and hear the statements coming from the Iranian Revolutionary Guard, bolstered with many threats and intimidation at the same time as statements of Iranian politicians calling for calm and asking the European Union, China and Russia to support their positions.

These Iranian positions are put forward based on their evaluation of the American reaction—militarily, politically and popularly—without taking into account the consequences of these positions internally and their impact on Iran, the people and the future.

The United States should understand that if it wants to achieve the results it desires from Iran, it should radically change the rules of the game, to push towards a policy that shows the weakness of Iran’s military and economy and shakes the state’s weak structure, which is based on sowing problems and strife for all its neighboring countries. It should also shake the credibility of Iran and the ayatollah’s regime among its proxies and neighboring countries. But before that, it should discuss it with the regional allies that it can trust and depend upon—and this does not mean the rulers of Saudi Arabia, the United Arab Emirates, Bahrain, Jordan, Qatar and Egypt, but above all, the people of the region, foremost the Syrians and Iraqis. To achieve this, it should review its strategy towards all these people.

The failure of the United States to understand this basic information could cost the region many losses politically and economically and in terms of stability. It could also make Iran a voter in the coming American presidential elections in a repetition of the hostage crisis.