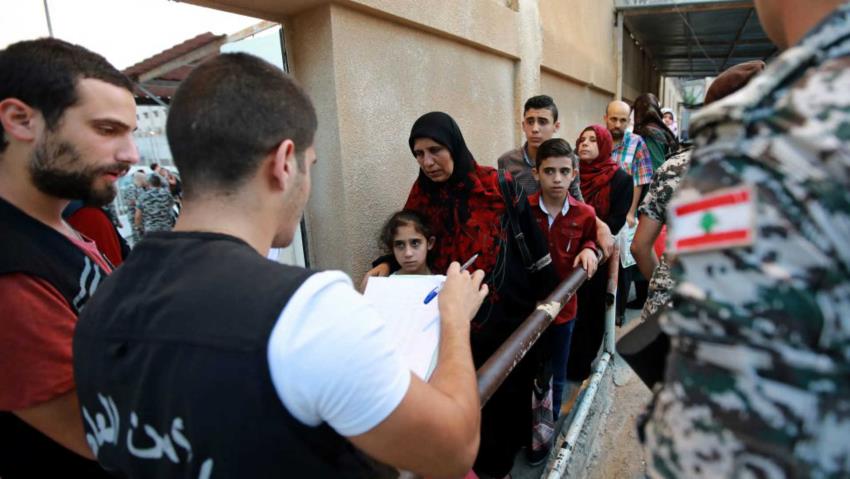 On hearing the idea that rejecting refugees, and giving unconditional support to people who share your nationality is genetic, you could be forgiven for assuming the speaker was quoting a European fascist ruler from the 1930s.

But this notion was was exppressed by Lebanon’s very own foreign minister, Gebran Bassil on 7 June 2019.

The foreign minister’s controversial comments about Syrian refugees and Lebanese identity in recent weeks have met with both condemnation and praise from the Lebanese people. Those who condemned his racist and xenophobic rhetoric started a campaign “against hate-speech” and held a brief protest.

Xenophobic rhetoric, evictions of Syrian refugee families, curfews, and other discriminatory practices are not new developments in Lebanon, and have occurred since 2012.

Bassil’s response to the initial outrage put him in even hotter water. “Some accuse me of being racist,” he said in another tweet. “But I understand because their ties to Lebanon are not strong enough to feel the way we do, and they have another affiliation that [they] feel stronger about.”

And this is certainly not the first time Bassil has spewed xenophobic and ultra-nationalist comments about Syrian – and Palestinian – refugees. For example, in 2016, while speaking to the Lebanese diaspora in several countries, he frequently said that the Syrian refugee crisis “threatens Lebanese identity.”

So if this kind of rhetoric and discriminatory practices are systematic and routine in Lebanon, then what makes the current climate unique?

As Lebanon’s economy falls increasingly into the gutter following decades of stop-gap measures, the foreign minister and the rest of the Lebanese government have been pointing fingers at Syrian refugees’ for the past seven years.

Their shortsighted and plainly racist analysis certainly chimes with the rhetoric of other far-right political parties and governments in Europe and North America. It’s also not the first time that rulers in Lebanon have adopted narratives from far-right and fascist Europe. The Kataeb – or Phalange – Party for example was inspired in part by Nazi Germany’s Olympics team and the Hitler Youth.

‘Lebanese above all:’ Escalating anti-refugee campaigns

Lebanon has clearly witnessed an escalation in anti-refugee rhetoric and actions in recent weeks.

Bassil’s political party, the Free Patriotic Movement, launched a campaign through its youth wing to target and shut down Lebanese businesses that employ Syrians.

Supporters gathered in in their dozens in front of small businesses, chanting the national anthem and waving flags. In the past ten days, they have managed to shut down some businesses in Beirut, mostly small restaurants, and have received excessive coverage from local media.

Volunteers distributed flyers calling on Lebanese citizens to send photos and videos showing Syrians working for Lebanese businesses, so they can call the authorities to shut the business down for violating labour laws. The flyers read that “Lebanon can’t take it” and that “Syria is safe for returns.”

Other flyers distributed in their campaign include false statistics, stating that Syrian refugees make up 40 percent of Lebanon’s population and that Syrian births in Lebanon outnumber those of Lebanese.

There is no clear documentation on the Syrian birthrate in Leabonon, but it is the country with the highest number of refugees per capita in the world, and registered and undocumented Syrian refugees at the peak of the crisis accounted for up to 25 percent of the country’s population.

But these racist exaggerations and outright false statements are clearly just a tool for incitement.

Bassil himself celebrated the campaign, seeing it as a step in the right direction. “Of course we want to distinguish Lebanese from foreigners in labour, housing, taxes and other things,” he said. “This is not racial discrimination, but the consolidation of state sovereignty.”

Opposition to Bassil’s rhetoric has been minimal to non-existent, even from political opponents who are often – however inaccurately – perceived as sympathetic or supportive refugees.

This particularly applies to Prime Minister Saad Hariri, an ardent opponent of Syrian President Bashar al-Assad and backed by the West and GCC. “I want refugees to return yesterday, today, and tomorrow,” he said at a press conference at the Grand Serail in Beirut on 11 June. When asked about Bassil’s rhetoric in particular, he believed it was an issue of tone and respect, rather than messaging.

It comes as no surprise, then, that this escalation in racist and xenophobic rhetoric has resulted in increased tension and violence between Syrian refugees and their Lebanese host communities. This is especially so in areas that are already economically vulnerable outside of Beirut, such as Arsal in northeastern Lebanon, or the various towns and villages in the Bekaa.

Up to 700 Syrian refugees have been displaced from their encampments at the Baalbeck town of Deir al-Ahmar in eastern Lebanon. Some Syrian refugees fought with Lebanese Civil Defense workers, and 33 Syrian men were arrested following a Lebanese Army raid.

The town’s mayor decided to evict all the Syrian refugees, in what the UNHCR described as “collective punishment”. Soon after, the governor of the Baalbeck-Hermel province issued strict curfews for Syrian refugees in the entire province to “protect displaced [Syrians] and to keep angry [Lebanese] residents calm.”

Elsewhere, Lebanon’s Higher Defense Council, a military body, decided to implement a decision to demolish all forms of semi-permanent refugee housing, beginning with those in Arsal on 9 June.

According to Save The Children, in a statement with two other NGOs, at least 15,000 children will go homeless, and no relocation for the 5,000 families affected has been discussed. The NGOs anticipate that this decision will be implemented in other municipalities, too.

Since Syrian refugees began to settle in Lebanon in 2012 to flee war and persecution, they have been the target of xenophobic political rhetoric and scapegoated by local media.

Lebanon’s struggling economy, lack of sufficient public services, poor infrastructure, and even its garbage crisis have been blamed on Syrian refugees. They have been subjected to curfews, forced evictions, arbitrary arrest and even torture.

But today, in 2019, it couldn’t be a worse time to be a Syrian refugee – especially in Lebanon:

The UNHCR suspended registration for Syrian refugees since May 2015, following a government order. And while the UNHCR continues to document a decline in international aid due to donor fatigue, Syrians are now being targeted for working jobs that prominent economists say that Lebanese don’t want to do themselves.

It’s clear that the Lebanese government is hoping to pressure Syrian refugees to go home by any means necessary, and however dire the situation they will find on their return. Lebanese politicians and officials have called for forced Syrian refugee returns since 2016, claiming that “safe-zones” exist, and that the war is dying down.

Syria is not safe for return. Russian airstrikes on Idlib continue, and security across Syria’s eastern provinces is unstable.

Refugees cite their fear of forced conscription into the Syrian Army, and organisations including Human Rights Watch continue to document harassment, arrests, and enforced disappearances by Syrian intelligence branches of returnees, including activists and media workers in areas retaken by Assad.

New property rights legislation by the Syrian government has led to arbitrary home demolitions, and refugees being turned away from returning to their hometowns.

Are returns feasible? One refugee summed it up to Human Rights Watch: “They took our children, our blood and now our property – what is left for us to return to?”

But, despite these dire circimstances, it’s “Lebanon above all” as Foreign Minister Gebran Bassil said, and has since been uttered by like minded nationals – even if it means sending a population of people to their own deaths.

At a time when corruption, financial mismanagement, and economic injustices are rampant in Lebanon, the government has scapegoated the “other” – in this case, Syrian refugees.

And just as we have seen populist leaders in the Global North gain popularity through this simple but false, racist, and violent rhetoric, we are now seeing it translate to the Middle East, too, where Lebanon has set a worrying precedent.