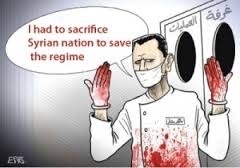 As the Syrian revolution enters its fourth year, the question remains as to whether Bashar al-Assad’s regime will exit power or whether it will finally be able to eliminate the opposition and subjugate the majority revolting against it?

The enormous number of daily battles across Syria certainly shows that three years of suppressing the Syrian people has not yielded results, despite the support the regime used to enjoy.

Two years ago, Assad was trying to buy a few weeks to control some areas rebelling against him. At the beginning of last year, he agreed in principle to negotiate over a new government in order to buy more time.

Then, when the deadly gas attack happened in the Ghouta area of Damascus, he rushed – upon Russian and Iranian guarantees – to make a proposal to surrender his chemical weapons arsenal.

The proposal was also a way for Assad to stave off American intervention and buy more time to finalize the battle in his favor.

Despite all the time, weapons and experts he has bought, and despite depriving the armed opposition of advanced weapons, Assad has still failed to tighten his grip on Syria.

All he has succeeded at doing was destroying the country in a manner conveying hatred and rancor. We enter the fourth year of the most ferocious war the region has known to topple a regime.

Half of the Syrian population is now displaced, while the number of those killed has reached in the hundreds of thousands.

At the same time, the battles are ongoing around Damascus. Now that the revolution enters its fourth year, the regime has consumed the time it bought to rid of its chemical arsenal. The regime will wither be exposed with no chemical arsenal or it will continue to stall in order to gain more time and thus embarrass the United States, and will probably place itself under the threat of NATO fires.

What about the international supporters of the opposition. Do they have the enthusiasm, capability and tolerance to arm the Free Syrian Army, aid millions of refugees on a daily basis and engage in political battles against Assad and Iran in international arenas?

Parties which believe in the opposition and support the Syrian people – particularly Saudi Arabia, the U.A.E. and Qatar – are still committed to their stance. These countries realize the threats posed if the opposition is abandoned.

They do understand that abandoning the opposition means the victory of the Iranian regime in the region as a whole. They are also aware that the tragedy will expand if they abandon their role at tilting the regional struggle which needs to be brought to end.

As the opposition enters another year of suffering and indecisiveness, the burden increases on the FSA, the opposition Syrian National Council, and other parties raising the revolution’s flag.

Unfortunately, these are the weakest parties in the Syrian crisis. They are still weak, divided and incapable of controlling their own structure, and continue to engage in their own internal power struggles. The opposition’s struggles have also stirred clashes among the sponsoring countries.

The opposition also bears some responsibility when it comes to having weak global political support, after stirring fears and worries regarding its abilities to manage the liberated lands, people and resources.

Criminal parties, like al-Nusra Front and the Islamic State of Iraq and the Levant (ISIS), infiltrated it as a result of its rivalry. These criminal groups have served the interests of the regime, threatening minorities and terrorizing most people who revolted against Assad’s authoritarian regime only to find a group that is no less evil.

In all cases, Syria today is not as it was yesterday, and it will not be like a future Syria.

The country’s situation has changed forever.

Assad and his regime are part of a history that has been decided no matter how hard he, Iran, Hezbollah and Russia try. We hope for the pain to be less and for the transition to be quick. Unfortunately, the world insists on prolonging the bloodshed, pain and brutality.

This article was first published in Asharq al-Awsat on March 13, 2014.