It will be up to the armies of Syria, Iraq and Russia to defend the interests of their people by preventing the breakup of Middle Eastern geography for benefit of Western energy interests, Ali Hashem writes for pro-regime Al-Watan 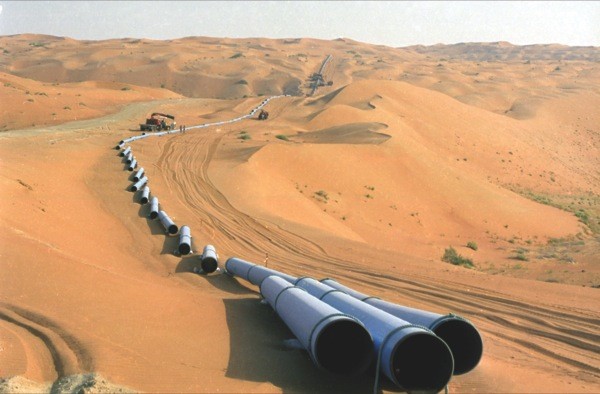 The Hashemite postman is engaged in a new mission to deliver messages to Syria and Iraq, consolidating the throne’s role as an employee set up by Britain.

Days ago, he was pushed along with others to harass their economic geography with the small, indulgent lie — the Shiite crescent. He did this to cover the likely operations Britain is working on to enter into southern and eastern Syria through its agent group the Hashemites, whose members' identities it was forced to expose when the United States caught it red-handed wetting the bed of British intelligence, prompting it to begin to reveal to a committee from the U.S. Congress headed by John McCain the details of its terrorist creations of “tribal and local fighters.”

Coinciding with the new mission of the Hashemite, whose stronghold has long formed a safe haven for British forces during the occupation of Iraq, the leader of the Sadrist movement went on to carry out a surprise attack against Syria, spontaneously completing the safe “British crescent.” This includes hosting an oil pipeline penetrating the “Shiite crescent” from Basra to Aqaba as a reward to the Hashemite for his valuable participation in facilitating the occupation of Iraq. Ironically, it is the sole pipeline which overcomes the complex conflict of interests and the terrorist maps of the Middle East.

The “British crescent,” disguised with the “Shiite” invention, has not yet been completed, and will remain suspended until the opening of the Trans-Arabian and Mosul-Haifa pipelines and the elimination of the Mosul-Banias pipeline.
The first, coming from Saudi Arabia, transferred its outlet from Haifa to the Lebanese port of Sidon after the occupation of Palestine, before halting the supply after the occupation of the Golan through which it passed. The second connects the wells of Mosul to Haifa, and perhaps it has become time to run it again on the basis of what occurred at the latest Amman summit 12 years after the end of marathon negotiations between the Hashemite and the government of Ariel Sharon to start it again.

Neither British pipelines will come back to life if the third is not buried through the dissipation of the “Five Seas Vision,” which broke the taboo converging Syrian and Iraqi geography and reconsiders the Land of the Two Rivers and the shores of the Mediterranean as a historic pathway to trade routes and oil pipelines. This includes the Mosul-Banias pipeline, which came to epitomize the understanding of British interests with American ones, represented by the U.S. secretary of state coming from the head of Exxon Mobil, a founding partner in its ownership before the partial Iraqi and Syrian nationalization during the nationalization of the Iraq Petroleum Company in 1972. Not to forget French interests, which saw, in its promised mandate over Syria, a chance to restore its share of it.

Within this conspiratorial situation, and with the increasing sense of danger over the possibility of an Iraqi-Syrian convergence as a result of the victories of the two armies in Mosul, Palmyra and eastern Aleppo, Britain has freed up its Hashemite king and all its other agents against the Syrian army, in line with the scandalous American decision to stop the Iraqi army from completing the liberation of Mosul.

The Syrian front has calculated the price of the British messages carried by the Hashemite. As for the Iraqi ploy, there is longstanding political and economic hesitation. Once Britain succeeds in carving out a land bridge in east Syria, leaving Baghdad entangled in the choice of trading the Banias port with the Mosul-Haifa pipeline and not the Aqaba port, Iraq is devoid of competitiveness, to the extent that it did not help the Hashemite to even reduce the imports of his kingdom through the Tartous port from 60 percent. After that, the stagnant Trans-Arabian pipeline will be allowed to flow again from Saudi Arabia to Haifa to be joined by another bundle from Qatar and the Gulf.

Economically, there is a more dangerous cost for Iraq if the connection between the Land of the Two Rivers and the Mediterranean shore is cut off. This economic geography, which was born on the territory of the British Empire through its economic arm the East India Company, is an aorta of Iraq that once broken down recedes to alternative trade routes placing the country in the back of the geo-economic bus of the Middle East, a position no one will go to except its residents after it is turned into a back garden of the Hashemite economy, which will in turn be a back garden to the Zionist throne pledged as the sword of the British crescent.

The oil lines of the British crescent hovering above the aspirations of Iraq and Syria also create a historic challenge for Russia through the corridor of European energy needs within this bag swollen with Western dreams, and it will be up to the armies of the three countries to defend the interests of their people by preventing the breakup of the Syrian-Iraqi geography.

Syria and Russia are currently acting. It remains up to the Iraqi government to rise up against the Western decision to delay the liberation of Mosul, and then to unite military action on both sides of the border.