In an effort to prevent the spread of coronavirus, the White Helmets are sterilising places where a high concentration of people gather reports Al-Araby Al-Jadeed. 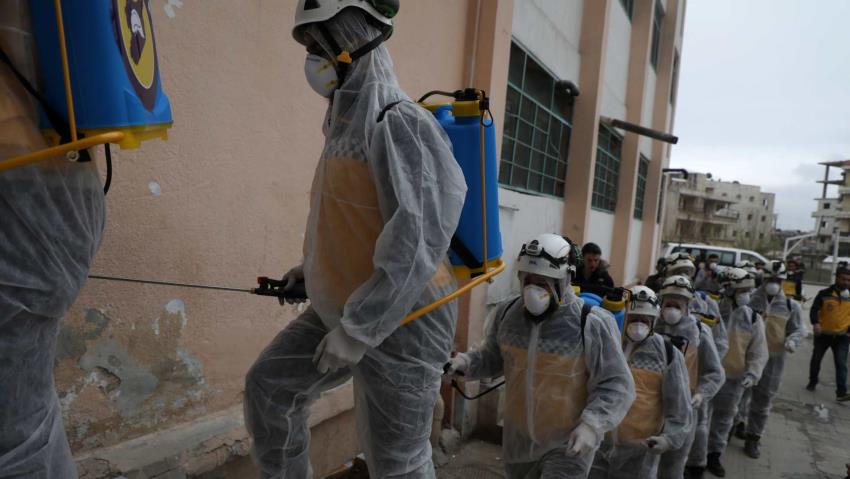 Syria’s White Helmets civilian defence force are taking measures to prevent the spread of novel coronavirus in the northwest of the country.

The White Helmets, also known as the Syrian Civil Defence, are sterilising “vital centers and facilities” such as camps, mosques, schools and other place which are regularly frequented, it said Sunday on Twitter.

The civil defence force are known for their rescue efforts in Idlib – which has been subject to heavy Russian and regime bombing.

Syria’s war, which entered its 10th year this month, is now concentrated in the northwest province of Idlib. The last rebel-held territory standing, Idlib has been ruthlessly targeted by regime forces.

The White Helmets were helped by Turkish health organisations to sterilise a school in the area of Ghosn al-Zeitun in Afrin on Wednesday as part of a campaign to disinfect schools against COVID-19.

The sterilisation campaign, reported by AFP, launched by the White Helmets suggests there are fears in northwest Syria that coronavirus is spreading in the population.

All vital centers and facilities that have a high population density are of key focus, such as camps, schools, mosques, and any other place that civilians frequent regularly.

All of its regional neighbours are struggling with outbreaks of COVID-19, but the Syrian regime denies any presence of the deadly virus in the country.

The rebel-held and densely-populated province of Idlib in northwest Syria, besieged by government forces and facing severe shortages of medical supplies and facilities, would suffer the most from an outbreak.

With nearly a million Syrians displaced to crowded and exposed makeshift camps, the conflict rendered hundreds of thousands vulnerable to the coronavirus.

The World Health Organisation (WHO) said it would begin testing for COVID-19 in opposition northwest Syria last week, Reuters said on Monday.

According to Reuters, only about half of medical facilities in rebel-held Syria are operational.

“We are hoping… to have the machinery and the tests sometime this week so we can start testing,” said Dr. Rick Brennan, emergency director for the region, told Reuters. “And we are very concerned. All of the surrounding countries have documented cases.”

There are serious doubts over claims by the regime that there are no coronavirus cases in the country.

The government has closed schools, universities and technical colleges until April 2. Sports and cultural events have been cancelled and the smoking of shisha pipes banned.

Local authorities have announced a week-long closure of schools and universities in Idlib, while educational centres have been shut down indefinitely in Kurdish-administered northeast Syria.