A new report has revealed that Iran was active in Syria at the outset of the revolution, supporting the regime and helping to suppress protests reports Brocar Press. 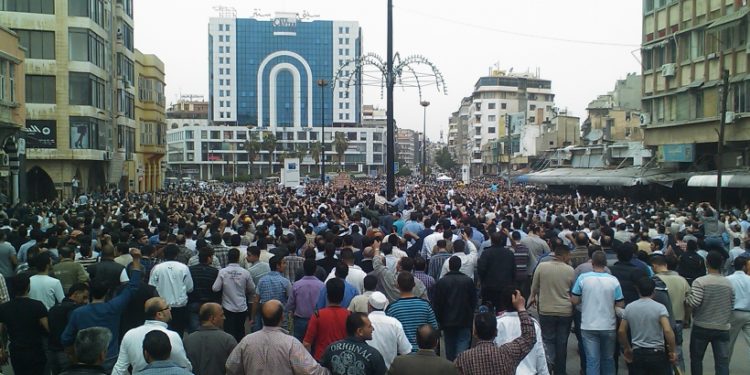 A news agency close to the Iranian Revolutionary Guard has revealed that Iranian police were involved in the repression of Syrian protesters who went out in 2011 as part of the revolution against the Syrian regime. The report came days after the Syrian regime’s defense minister confirmed that the Iranian Quds Force commander, Qassem Soleimani, was involved in the first battle against rebels in Homs city.

The agency said in its report, “Fighters Without Borders … Know Them Better,” that Iranian military and police forces went to Syria to help the police in repressing what it called “a street rebellion,” in a reference to the protests at the time.

Iranian security experts gave instructions to Syrian regime fighters in order to repress the protests, according to the report.

The Radio Farda site said that the report about Iranian security officials had noted that the Syrian regime had at first, lack sufficient information to deal with protesters and so for the same reason the regime had resorted to a military solution, rather than security one, which led to the situation deteriorating, according to the Al-Hurra website.

Earlier this month, regime Defense Minister Ali Ayyoub revealed that the Iranian regime had militarily intervened on the regime’s side from 2011, the first year of the revolution.

Ayyoub said in a video recording that: “I knew Qassem Soleimani since 2011. The first battle that we planned and entered together was the battle of Baba Amr in Homs city.”

Ayyoub’s statements were an official acknowledgement of the participation of the Quds Force commander in fighting on its side, after it had been denying what the opposition had been claiming—which was that Iranian militias and snipers had been targeting peaceful protesters.

The regime denied the Iranian intervention during the first years of the revolution, while massacres were carried out against peaceful protests. It then thanked the Iranian “ally” officially for standing alongside it.

Iran continues to form militias in Syria, with new militias formed under the name “Assoud al-Mahdi.”