The situation for displaced people has become drastically worse after camps and temporary shelters were buffeted by winter weather that cause flooding reports Zaman Al Wasl. 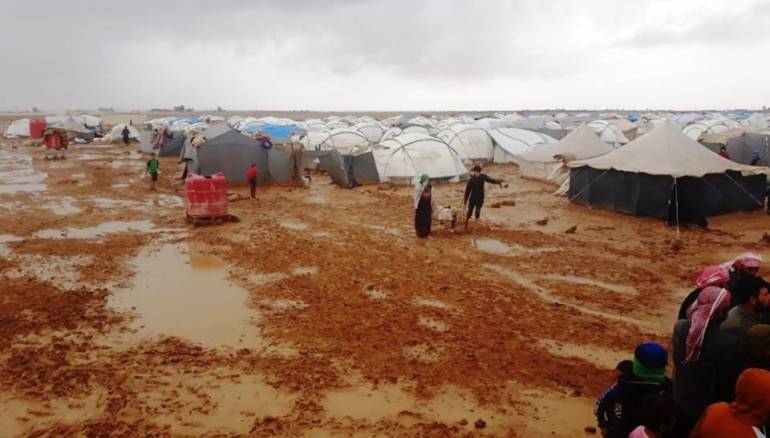 Powerful winter storms have hit Syrian refugees camps across the Turkish and the Iraqi border, worsening conditions for those who have fled the eight-year-old war.

Torrential rain and strong winds have lashed areas in the eastern provinces of Deir ez-Zor and Hassakeh and in northern Idleb province and parts of Hama province.

The rain, which was accompanied by powerful thunderstorms, has turned most of the makeshift camps into a lake of mud.

Abou Hussein, a Syrian displaced, said about 650 families in Maarret al-Nu’man camps in the eastern countryside of Hama province have been living in bad living conditions, and urged aid and relief agencies to lessen their suffering.

Sajjad Malik, the UNHCR Country Representative in Syria said via his official Twitter account that storms had damaged a number of IDP camps in northeastern Syria, particularly serious is the situation in Abou Khashab camp.

While the regime and its key allies say the war is over, thousands of Syrian refugees who are scattered on the borders and in makeshift camps still feel they are neglected and abandoned.

About 75,000 displaced people in the al-Rukban camp at the Syrian-Jordanian border are under a severe siege by Jordan and the Assad regime. A dust storm ravished their tents on Wednesday.