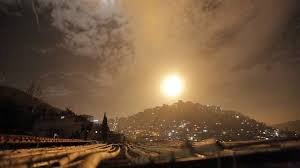 Dozens, if not hundreds, of joyful tweets and posts are written by Syrians celebrating whenever there is news of Iranian, Hezbollah or Syrian regime positions being hit by Israeli warplanes.

In the beginning, this joy at Israel striking Iranian posts was somewhat shy, and was limited to a specific audience. Then it developed to include all those who have a martyr or a prisoner from their houses or have suffered repression from one of a regime figure. The scope of the schadenfreude expanded to included those in regime areas and has extended to them ridiculing regime statements such as those attempt to pass off strikes as being the result of an “electrical fault.”

The pro-regime public, specifically on the coast, also express their joy, but not at the bombing of Iranian positions considered to be foreign occupiers of their land (they see them as allies) but when Russian planes bomb civilian sites and villages in Idleb—or any other areas that opposes the ruling regime, forgetting that the victims are Syrian citizens with Syrian ID cards. It’s not just this, but they also share images on their pages of women and civilian victims as evidence of their victory over terrorism, despite the fact that the bombing did not hit al-Nusra Front positions (affiliated with al-Qaeda) as is currently happening in Idleb, and that most of the strikes hit civilian sites.

The first celebrates Israeli strikes and the second celebrates Russian strikes. The first celebrates the bombing of Iranian positions, chosen carefully without images showing the extent of the damage, being a purely military site, and which are kept silent about because they are military secrets. The second meanwhile are celebrating Russian bombardments accompanied by regime barrel bombs of sites that are mostly houses and villages, along with dozens of bloody images of crimes against civilians, most of them buried under the rubble of their own homes.

My Egyptian friend ended by saying: “What do you think of what your opposition friend said?”

I didn’t respond in words. I just sent him a video clip of regime supporters standing in front of rockets ready to be launched and saying: “This is the Ramadan iftar for the people of Idleb,” then launching the rockets.