Mazloum Abdi is the leader of the Syrian Democratic Forces and has played a prominent role both on the battlefield and in diplomatic efforts with Western leaders. 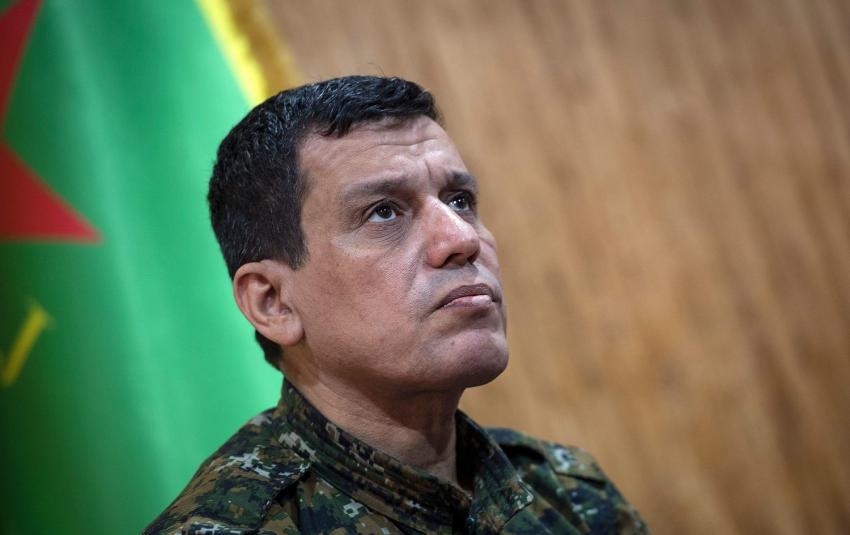 The Syrians had never heard the name Mazloum Abdi before the Syrian revolution and the forces of the Kurdish Democratic Union Party (PYD) arrived. In record time, Abdi rose to the forefront of events and commanded real military battles, achieving victories on the ground. More importantly than that, he, in partnership with Ilham Ahmed, established political and diplomatic relations with most leaders of Western governments, most notably the United States.

Abdi has consistently used several aliases, out of fear of prosecution, as Turkey has put him on its terrorist lists and considers him to be among their most wanted, due to his connections with the anti-Ankara Kurdistan Workers’ Party (PKK). His name has come up a great deal recently, owing to his role in the conflict and the ongoing war in northern Syria, where he led the Syrian Democratic Forces (SDF).

Born Farhad Abdi Shahin, and known by his nom de guerre, General Mazloum Kobani, he was born in 1967 and hails from the Kurdish village of Halanj, which is near Kobani. He has been known by various other names, such as Shahin Tchelo and Mazloum Abdi.

Abdi joined the PKK in 1990, and reports indicate that he was close to the group’s leader Abdullah Ocalan, who is imprisoned in Turkey. He held a number of responsibilities in the PKK, one of the most important being responsibility for the special forces and being a member of the executive committee. There are many photos of him with Ocalan when he was young.

He was arrested by Syrian authorities numerous times in the 1990s because of his political work, before he was released for the last time and traveled to Europe in 1997. He remained there until the American invasion of Iraq in 2003, and then returned to Iraqi Kurdistan and joined in political activities there.

In 2011, Abdi became prominent as a leader in the Kurdish People’s Protection Units (YPG) when the events broke out in Syria. In 2014, he became involved in negotiations with Washington to form an alliance against the Islamic State (ISIS) in Syria, and then he later became a commander of the SDF.

The Kurdish commander’s star shined once more in 2014 when ISIS took over large parts of Kobani city. He formed military forces to fight the group in coordination with the Americans and Iranians.

These forces were officially recognized in 2015 as the SDF, of which the YPG are the main component.

Mazloum was a leading commander in the military operations against ISIS, and managed negotiations with international forces, especially the United States. He received military and logistical support from Washington, which sent advanced military equipment and heavy weapons, including anti-armor weapons.

The SDF, in cooperation with the International Coalition, was able to expel ISIS from Ayn al-Arab and later from other areas. With that, he bolstered his authority with the United States, which relies on him to lead land operations against ISIS.

Recently, Turkey launched Operation Peace Spring in areas where the SDF are deployed near the Turkish border, with the aim of pushing them away from the area and setting up a safe zone on the border for displaced Syrians. The operation coincided with American forces withdrawing from the Ras al-Ayn and Tel Abyad areas, which was considered a “betrayal” by its allies there in the SDF.

Relations with the United States and Turkey

Mazloum enjoys good relations with the American administration, which views him as a trustworthy man. He also has strong allies in Congress. Both Republican and Democratic members in the Senate and State Department have called for issuing a visa to Mazloum quickly so that he can visit the United States and discuss the situation in Syria.

Turkey has criticized the United States’ way of dealing with Mazloum, as an “illegal political figure.” Ankara views him as a terrorist because of his close ties to the PKK, which has carried out a decades-long rebellion in Turkey.

President Recep Tayyip Erdogan has called on his American counterpart to hand the SDF leader over to Turkish authorities, saying that he is wanted according to a Red Notice issued by the European Interpol police.

In March 2020, US Senator Lindsey Graham spoke with Abdi on the anniversary of the liberation of Baghouz, which marked the territorial defeat of ISIS. “Had a great phone call with General Mazloum, leader of the Syrian Democratic Forces today,” Graham tweeted.

“The fight against ISIS continues,” Graham added. “It is in our national security interests to continue to partner with the SDF, who helped destroy the caliphate.”