Saqr Rustom has become well known for his financial corruption, his confrontations with other loyalist and massacres carried out by group. 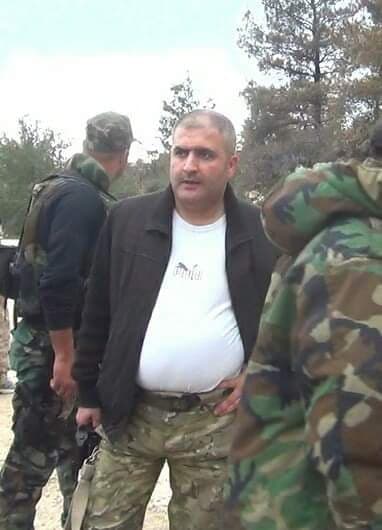 From a mid-level bureaucrat to the head of the local branch of the National Defense Force, the largest regime-affiliated militia, Saqr Rustom was believed at a certain time to have more influence than almost any other government official.

Not many people had heard of Saqr Rustom before the revolution, and those who did, knew him from his financial corruption.

Originally from the province of Homs, Sakr Rustom trained as engineer and occupied a high-level managerial position as Investment Manager and head of the Procurement Committee at the Industrial City in Hessia. However, due to a corruption scandal Rustom was dismissed from his job in 2009 and transferred to the Governor’s office to work on technical services.

At the outbreak of peaceful protests in March 2011, Saqr Rustom was encouraged by his maternal uncle, General Bassam Hassan, to join the al-Bustan Charitable Association, founded and headed by the infamous tycoon Rami Makhlouf. Rustom was assigned to take care of displaced families from the Alawite community.

However, when the protests grew and became more forceful, Rustom was tasked with mobilizing young pro-Assad people, especially among Alawites, to participate together with the security services in the repression of the protests. In mid-2011, he established the Popular Committees, which later became the National Defense Force. Initially, the Popular Committees sought to protect pro-Assad neighborhoods in Homs, but later transformed into combat groups supporting the forces of military security and the Air Force Intelligence in raids, which were launched in neighborhoods in the city of Homs.

The Popular Committees members worked on a voluntary basis and were not paid, but they received some aid from the al-Bustan Association. However, with an increasing number of fighters, the regime began to allocate salaries, resources and logistical and technical support. The Popular Committees were also enhanced with civil servants who were reallocated to the Committees and were armed through the al-Bustan Association.

The Popular Committees later became the National Defense Forces (NDF), which spread terror and crime across the city of Homs. By 2012, the number of fighters in the National Defense Forces rose to 2,500, stationed in three areas in loyalist Homs neighborhoods. They were responsible for looting the deserted houses and taking furniture and electronics, which would be sold on the roadside.

Saqr Rustom also ran a number of detention centers and private prisons in the Wadi al-Dhahab neighborhood and in the countryside of Homs, where he kidnapped civilians on public roads charging them with opposition to the regime and then blackmailed their families to pay for their release.

Saqr’s criminal acts did not only infuriate the population in the opposition areas but also the loyalists themselves. Many loyalists accused him and his group of harassment and mistreatment and took to the street in Wadi al-Dahab to protest against his acts. He was accused by loyalists of trading with the opposition areas, selling them weapons and ammunitions, as well as tobacco products.

The then Governor of Homs, Talal al-Bizri, tried to prosecute Rustom’s groups and arrested a couple hundred of them. Following the arrests, the Governor’s residence was targeted with mortars, which many loyalists believe Rustom to be responsible for.

Additionally, clashes between Rustom’s forces and the military security forces occurred several times, which led to casualties on both sides. Consequently, Rustom was transferred to Damascus to soothe the loyalists on the street. In Damascus he was elevated to be the Secretary General of the National Defense Forces.

Saqr Rustom was widely known for his ruthlessness and ill temper. It was easy for him to get irritated and lash out. An in these cases, it would be a grave error to get in his way.

Rustom and his militias bear responsibility for a number of massacres, including one in Ram al-Anz in February 2012, where more than 50 bodies were discovered in the village in Homs province, with victims of varying ages bearing signs of torture and shooting. Victims were later identified as a group kidnapped and killed for sectarian reasons.

Another major massacre occurred in the neighborhood of Jobar around the same time, when Republican Guard forces, together with the NDF, drove male civilians (including youths and the elderly) from their homes and gathered them in two schools. Ahmed al-Sayes, the leader of a group under the command of Rustom, ordered his forces to open fire on the civilians in the schoolyard. More than 150 people were murdered in the incident.