As the head of the Air Force Intelligence in Aleppo, Major General Adeeb Namr Salameh, has overseen a systematic policy of oppression and torture. 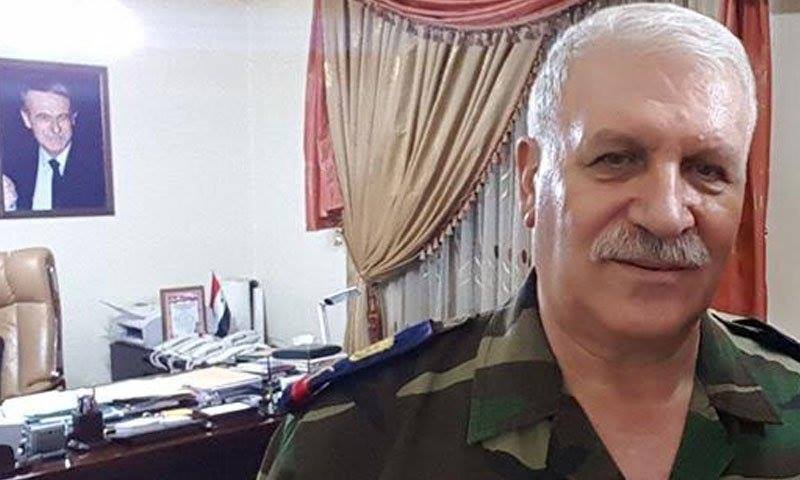 Adeeb Salameh does not occupy a position on the frontlines, but he has, according to rights activists and human rights organizations, a proven track record of human rights violations and an important position among Syria's security commanders. He played an especially central role in oppressing and violating human rights after taking on the duties of the head of the notorious Air Force Intelligence branch in Aleppo. Salameh is one of the most extreme officers, and one of the first to form a "shabiha" militia in the Salamiyeh countryside under the command of his brother Mussib.

Adeeb Salameh, 65, comes from the village of Dahr al-Maghar, one of the villages of the Salamiyeh in the countryside of Hama province. He enrolled in the Military Academy for Air Defense, and was close to Major General Jamil al-Hassan, Director of the Air Force Intelligence Directorate, which led him to follow the same professional path until he became Head of Air Force Intelligence in Aleppo from 2006 to 2016. During that time he transformed the branch into a symbol of horror and terrorism, adopting torture methods that killed a large number of prisoners.

Major General Salameh was supposed to have retired in 2011, but the eruption of the revolution delayed this. Indeed, on the contrary, he was promoted from Brigadier General to Major General, and his star quickly brightened. His branch became one of the largest centers for the torture and killing of civilians.

Salameh was in favor of pushing the revolution towards militarization and extremism, and is quoted as saying to his assistants: "The more the brigades of the Free Army increase, the better it is for us. It's also better if no civilian departments (traffic police, registries, water) are established in areas outside our control."

In April 2014, Major General Salameh was nearly killed during heavy fighting which erupted on the Air Force Intelligence front, in which the armed opposition aimed to take control of the branch. The First Deputy Director of the Office, Assaf Hourani, was killed at the time.

During the revolution, the Air Force Intelligence branch headed by Salameh committed hundreds of violations against civilians and peaceful protests. Rights networks have documented the deaths of hundreds under torture, while the Air Force Intelligence has been described as a nightmare by residents of Aleppo, and as one of the worst security agencies.

Salameh, known for his fierce temper, poured it out on Aleppo after the blast that targeted the city of Salamiyeh and which claimed the lives of a number of his relatives. He took revenge on prisoners, with the number of martyrs who lost their lives under his orders and supervision in the dungeons of the Air Force Intelligence throughout the revolution reaching more than 3,700 people.

Many massacres and violations carried out against civilians in Aleppo have been attributed to him, such as the massacre carried out against prisoners in his Aleppo prisons on Jan. 29th, 2013, which killed about 128 civilians. The bodies were thrown in the Queiq river, with bullet holes in their head. This crime was considered one of the worst in Aleppo during this period. There was also the massacre of al-Malakiya village in Aleppo on Feb. 27th, 2013, when a number of the village's houses were burned and more than 70 civilians were exectued, most of them children and the elderly. In addition, his fighters stormed the village of Aziza on Apr. 4, 2013, and arrested and then executed about 20 people.

Because of his position and the free hand given to him by Assad, Syrian rights organizations hold Major General Salameh fully responsible for the lives of thousands of prisoners in the Air Force Intelligence prisons, which uses a policy of neglect, starvation and the deprivation of medical treatment followed by the security authorities unleashing punishment and revenge against the prisoners for their opposition to the Assad regime.

Salameh is one of the most extreme officers and one of the most prominent symbols of Assad's crimes. He was the first to form the "shabiha" militias in the Salamiyeh countryside under the command of his brother Mussib, who took part in most of his violations in terms of torture and killings committed against all components of Syrian society, as well as the kidnapping and the subsequent demands for millions in exchange for releasing them. This covered the major murder, kidnapping and looting gangs in the Hama countryside, specifically in the city of Salamiyeh, under the leadership of his brother Mussib.

He was not content with just this, but imposed his influence on all the security branches and authorities in Aleppo, and established commercial relations with city merchants and industrialist, to the extent that he gained the nickname "Aleppo's president," in addition to his record reeking of corruption.

He has been implicated in major corruption cases and has received huge amounts of money in exchange for preserving factories or protecting them, while appointing himself as a partner to every major investor in the city.

The Syrian Association for Human Rights has reported that Aleppo's residents have often found unidentified bodies with their hands bound near the Air Force Intelligence headquarters, which clearly suggests the systematic nature of the killings carried out against prisoners in this branch.

In 2012, Human Rights Watch issued a report titled, "Torture Archipelago," in which it addressed the torture and forcible disappearances at the hands of Adeeb Salameh and under his command in a section titled, "Death everywhere."

On Oct. 21, 2016,the American Ambassador to the United Nations, Samantha Power, threatened a dozen Syrian officers and accused them of giving orders to carry out attacks on civilian targets and torturing opposition members in a systematic fashion. These included Major General Adeeb Salameh, noting that they had hidden behind the face of the Assad regime, and that they need to know that their crimes have been documented and they will be held to account one day.

He has not directly participated in the killings and has been content to give orders and oversee the violations, however this does not clear him of legal responsibility and accountability. There are laws that criminalize all those who participate in committing any massacre even if he did not participate directly, such as in the Rome Statute, the Fourth Geneva Convention and international humanitarian law.

Transferring war crimes in Syria to the International Criminal Court needs to be done through the Security Council that has been impeded by Russia's veto, which has been a barrier for all international reports, which have condemned the crimes of Assad and his officers, and have caused the deaths of tens of thousands of innocents. In addition, Russia has pulled out of the Rome Statute, enabling it to protect those who commit these crimes, and try to prevent them from appearing before international courts, which has contributing to prolonging the life of Assad's butchers and their increasing commitment to massacres against the Syrian people.