As a refugee, Muzoon Almellehan has work tirelessly to secure education rights for young girls. 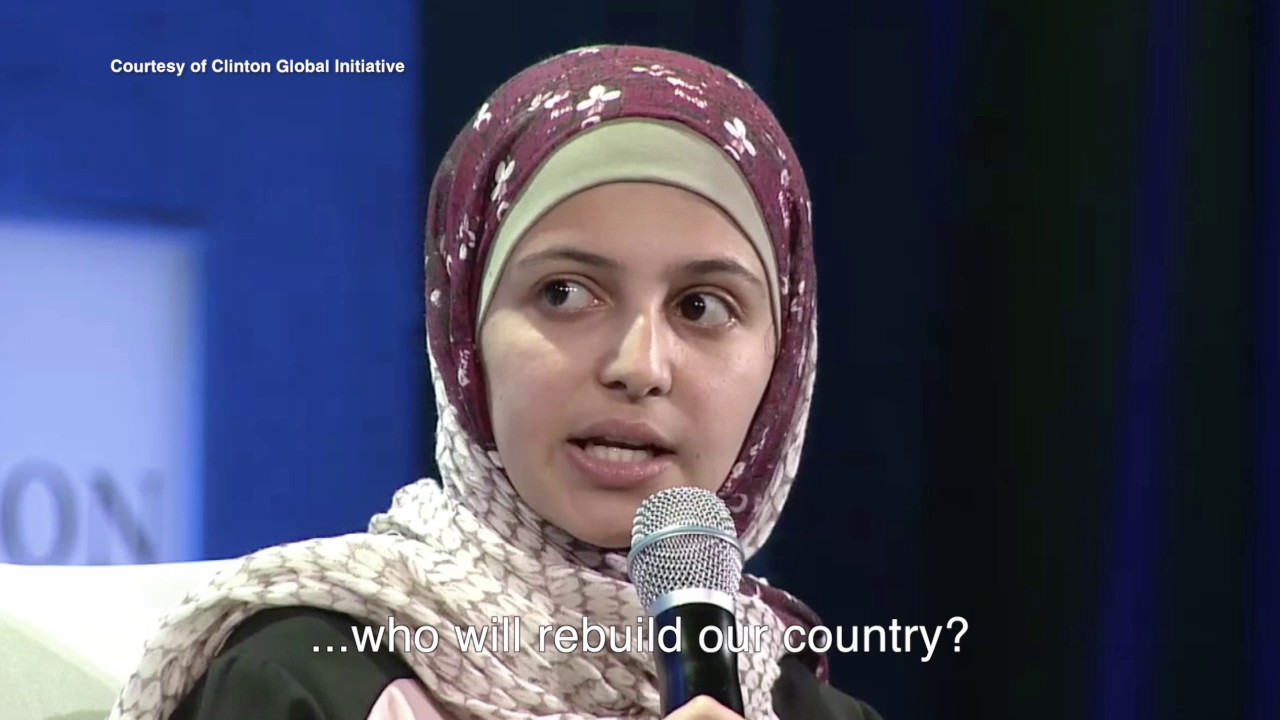 In 2017, at 19-years-old, Muzoon Almellehan, was the youngest, and the first person with an official refugee status, to become Goodwill Ambassador of the United Nations Children’s Fund. This young lady has led a campaign to end early marriage and encourage young girls to remain in school.

Muzoon Almellehan was born in April 1999 to a Syrian middle-class family in the city of Daraa, the cradle of the Syrian revolution. Her father Rakan Almellehan was a teacher. In 2014, the family was forced to leave its home and flee to Jordan where they became refugees. The Almellehan family had to move several times but their first place of stay was the Zaatari Camp, where Muzoon started her campaign for educating girls.

She has since become known for trying to persuade parents to leave their children, especially girls, in refugee schools rather than making them marry early. She also tried to persuade children to stay in school and to prevent child marriage. Her efforts began after she saw half of the 40 girls in her class in the Zaatari camp leave school to get married.

During the family's 18-month stay in Zaatari, one of the world's largest refugee camps, Muzoon noticed that one girl out of two in her class dropped out of school to get married. Syrian refugee parents were pulling them out of the classroom and pushing them into early, and often doomed, marriages.

Nearly one in three of all registered marriages among Syrians in Jordan involved a child marriage, according to a study that was run in 2014. Many of these ill-fated marriages end in divorce, leaving the girls with no education and few prospects.

Muzoon was very concerned that this would damage the future of half of the Syrian people who were forced to leave the country. She saw the importance of education for all and particularly for girls, the future mothers who need to secure a stable future for their children.

Alarmed by the trend, Muzoon began a campaign, going door-to-door from tent to trailer in the settlement, pleading with refugee parents to allow their young daughters to stay in school. “I would tell them that we are the future,” she says.

“As a refugee, I saw what happens when children are forced into early marriage or manual labor: they lose out on education and they lose out on opportunities for the future,” says Muzoon. “That's why I am proud to be working with UNICEF to help give these children a voice and to get them to school.”

In 2017, UNICEF appointed, in a historic first, Muzoon Almellehan, now 19-year-old, as its newest – and youngest – Goodwill Ambassador. Muzoon became also the first person with an official refugee status to become an Ambassador for the UN agency.

“Muzoon’s story of bravery and fortitude inspires us all,” said Justin Forsyth, Deputy Executive Director of UNICEF, in a press release, adding: “We are very proud she will now become an Ambassador for UNICEF and children around the world.”

Now headed to college, Muzoon was only 14 when the Syrian civil war forced her family to leave their home in Daraa in the middle of the night and cross the border into Jordan. “Even as a child, I knew that education was the key to my future, so when we fled Syria, the only belongings I took with me were my school books,” she recalls.

At this month's G-20 Summit in Germany, Muzoon told her story and addressed world leaders on the vital importance of education rights for all.

Her hard work to advocate for girls’ education allowed some to compare her to the Pakistani teenage activist Malala Yousafzai, calling her the “Malala of Syria.” In fact, Muzoon and Malala met in person and became fast friends when Malala toured refugee camps in Jordan. In 2014, Malala invited Muzoon to be her guest at the ceremony in Oslo when she became the youngest person ever to be awarded the Nobel Peace Prize.

Since fleeing her homeland, Muzoon Almellehan lived in Jordan for three years, before being resettled in the United Kingdom.