Charity organizations are highly reputable in Syria and may be considered the oldest forms of civil society in the country. 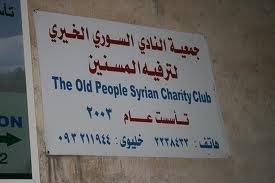 Charity organizations are highly reputable in Syria. They may be considered the oldest forms of civil society in the country. Owing to the long historical disagreement between the consecutive governments and the citizens, specifically the wealthy ones among them, the charity organizations became an expression of a social mutual assistance on the one hand, and a Zakat (alms tax in Islamic Law) channel on the other. Syrian industrialists and businessmen mistrust the current tax system as a substitute for Zakat, thus the majority of business men dodge paying taxes to the government while they are never late paying their Zakat due.

Civil organizations and societies have a long history in Syria. In 1880 ‘the Sayed Quraish Orphanage Charity Society’, was the first established society in Syria. Such societies at that time took the form of civil activities, performed voluntary by people out of a sense of duty and good work. During the French Mandate, civil societies were developed along a wider fashion, where they carried out tasks directly related to citizens’ daily life and health; thus a committee of independent Syrian celebrities was founded to establish a project to draw the clean water from a water spring 30 km away from Damascus to the city, to provide clean water in place of the Barada River polluted water. The ‘Mouwasat Hospital’ in Damascus established by ‘Al-Mowasat Society’ provided much needed health services to the Syrian people, ‘the Green Society’ was established in the thirties providing free education and accommodation at its boarding schools for the rural youth; and later  thousands of people flocked to Syria following the 1948 war, where they were provided with life’s necessities, the same scene was repeated following the July war of 2006 in Lebanon, where Syria opened its cities to embrace the people fleeing that war.

After the Independence, Civil societies’ tasks changed with the economic and political changes that occurred. New movements and trends emerged calling for social reforms and for setting social solidarity systems. A social security law, Law No. 92, 1959 was issued, following a series of studies on the economic and social conditions in the country, with assistance from the International Labor Office on social and economic conditions in Syria in 1957. After that, a string of regulations and decrees were issued related to health and old age insurance, incapacity and death; as well as guidelines for the establishment of social care institutions. On the basis of these regulations, numerous societies and organizations offering various social services were established. 1974 represents the final phase of the civil societies’ development in Syria, where societies’ laws were defined within a general framework of thirteen articles that were prerequisites for civil societies’ establishment and practices. These articles include the provision that a society needs to inform the Ministry of Social Affairs and Labor of any general meeting of its members 15 days prior to the meeting’ assigned date, along with the minutes of that meeting; and the Ministry has the option to send one of its employees to attend any of the society’s interviews.

There are 600 charity societies registered at the Ministry of Social Affairs and Labor, constituting the highest rate among non-government organizations. It is worth noting that charity societies enjoy relative autonomy and extensive influence among the various social classes within the society, and even among government circles.

While some theorists consider charity societies to be part of the communal (pre-civil) society, which is looked upon as inferior to the civil society, civil society’s activists believe that charity work had confirmed that the communal society is an effective and capable of generating solutions in times of need. These activists bring up as an example the "innovations" of the Syrian civil society during the 2006 Israeli war on Lebanon, when about a million Lebanese refugees flooded to Syria. It was the Syrian civil society which managed to receive these refugees, accommodate them and take care of their requirements.

One activist in the Syrian civil society domain comments on this saying, ‘hard times make the civil society, perhaps for the first time, express outstanding vitality and dynamism thus canceling out depictions of rigidity, sameness, triviality and irresponsibility attributed to the Syrian youth. One can point to a noteworthy phenomenon where the civil society outstandingly performed its role by supporting the resistance, surpassing one whole year of mutual factional tensions between the people of the two countries, going beyond factional tensions that accompanied the American occupation of Iraq and promoters of the new Middle East; thus currently (the rejectionists) are not guests but rather owners of the house; (65%) were accommodated in private homes. Syrians believe that this is the least they can offer the families of the resistance and victims of aggression.’

However, religion still plays an extremely important role in the domain of charity work, as most Syrian charity organizations are run by Muslim or religious men. This is true of all charity work organizations, including the largest and most influential such as: ‘the Preservation of Grace Society’, ‘Al-Ansar Charity Society’, ‘the Islamic Society of Piety and Charity,’ ‘Caritas’ , ‘the Syrian Fraternity Family’, the numerous orphanages and old age homes and many others. All large charity organizations control a considerable movement of sums of money, which makes their supervisors hold back any public information related to their charitable and developmental projects. The recently established societies such as ‘the Preservation of Grace Society’ (PGS) established by the Damascene Sheikh ‘Sariya Al-Rifaie’  is an exception to this state of affairs. The said society abides by the principle of preserving leftovers from weddings and similar social and formal occasions, to be distributed among the destitute communities.

PGS, which had a mediocre start, has become one of the biggest charity societies in Syria. In addition to its food preservation principle, its activities were extended to include clothing, medicine and furniture. It is equipped with specialized work teams for its various projects, who collect, sort and distribute donations to the needy.

Syrian charity organizations provide services in other domains as well like: caring for people suffering from chronic and incurable diseases and those with special needs, who according to The World Health Organization constitute 10% of the total population in Syria. Despite this fact, they are hardly visible in the streets and public places. Where are all these people, why are they absent or being absented from the society? This question was a major concern to the charity and civil organizations. One activist lady at ‘the Syrian Women Observatory’ and head of the department catering for the handicapped says in answer to the above question, that the society’s negative attitude towards the handicapped exemplified by pity and related in one way or another, to social traditions and consideration, impel the parents of the handicapped people to keep them indoors, owing to a sense of shame and burden felt by these parents regarding their handicapped dependents.