Born to a Christian family in the city of Qatana, in the Damascus Countryside, Sabra is known for his long history of opposition to the Assad regime in Damascus, as a leader of a communist faction in Syria. 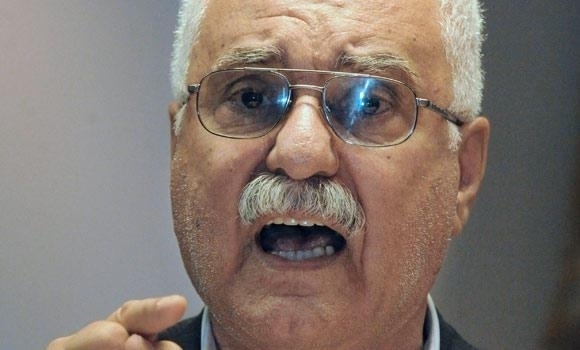 Currently the president of the opposition Syrian National Council (SNC) and the acting president of the Syrian National Coalition, George Sabra has proven an alluring subject for the media. Born to a Christian family in the city of Qatana, in the Damascus Countryside, Sabra is known for his long history of opposition to the Assad regime in Damascus, as a leader of a communist faction in Syria.

Sabra has been arrested several times both under President Bashar al-Assad and his father and predecessor, Hafez. In 2000, he represented his party in the first opposition coalition to be formed since the arrival to power of the Baath Party, the National Democratic Rally, which was originally formed in 1979. He was subsequently elected to the Rally’s Central Command. Later. In 2005 he played a leading role in another opposition group, the Damascus Declaration along with the veteran leader of his party, Riad al-Turk.

As a leftist, pro-Arab, secular opposition figure, George Sabra has been politically active in the opposition since the 1970s. He joined the Syrian Communist Party in 1970. When the party spilt in 1972, he joined the faction that was led by the young, ambitious hard-liner Turk, the Political Bureau, which opposed Soviet Union intervention in the party and called for Arab unity. Sabra was elected to the party’s Central Committee in 1985. He was arrested in 1987 during one of many government crackdowns and imprisoned for eight years. Following his release in 2000, he was assigned to represent the party at the National Democratic Rally, a coalition of leftist parties, formed in 1979. Sabra was subsequently elected to the Rally’s Central Command.

Sabra graduated with a degree in Geography from Damascus University in 1971 and a degree in Educational Technology Systems from Indiana University in 1978. He worked as a high school teacher and an education specialist at Syrian TV, participating in the production of a TV program for children, as well as writing children’s books.

Sabra was co-founder of the Damascus Declaration opposition coalition in 2005. The same year, the Syrian Communist Party (Political Bureau) changed its name to the Syrian Democratic People’s Party. He remained in Syria after the uprising began in March 2011 and was imprisoned in July for two months on charges of inciting dissent. In October, he went into exile in order to escape re-arrest and joined the SNC as the representative of the Democratic People’s Party. Sabra nominated himself as a candidate for the presidency of the SNC after chairman Burhan Ghalioun’s term expired in May 2012, however he lost the nomination to Abdulbasset Seeda.

Sabra initially failed to win a seat on the new 41-member General Secretariat that was elected at the SNC conference on November 8, reportedly due to a technicality. However the grassroots Revolutionary Movement relinquished one of its two seats to bring him into the body and he subsequently defeated rival candidate Hisham Mroue to become the new SNC chairman.

Sabra is known for his political tenacity. His many years in prison did not make him any more sympathetic or tolerant of the Assad family regime. He is widely respected among Syrian dissidents, and also among his home community of Qatana, a mixed Muslim and Christian city. He is a known as political hardliner who does not accept compromise. Although considered a loyal member of the People’s Party, he has reportedly differed with the veteran leader of the party, Turk.

Sabra was among the fiercest opponents of an initiative by former Coalition President Sheikh Mouaz al-Khatib to start dialogue with the Assad regime. It is also widely rumored among opposition circles that he is close to the Muslim Brotherhood. Many have expressed cynicism over his election to the SNC presidency and Coalition posting, suggesting that the Muslim Brotherhood installed him as a puppet to provide an appearance of secularism to a group they largely control.

In 1959, aged 12, Sabra had an experience that would shape him personally and politically for the rest of his life. Syria had united with Egypt to become part of the United Arabic Republic headed by President Gamal Abdel Nasser a year earlier. As part of the terms of the union demanded by Nasser, all political parties in Syria were disbanded and Syria’s parliament was merged with that of Egypt. A Nasserite stooge was placed as head of Syrian military intelligence in what became known as “the northern province.” The union was not a happy marriage for many reasons, but its impact was particularly felt by the Sabra family.

“My father was sacked from his government job during the Union under the false charge that he was a Communist,” Sabra recalled, “this was the way that the Second Bureau [military intelligence] oppressed people at that time.” Sabra’s mother was forced to enter domestic service in the homes of wealthy Damascenes, and baked bread which she sold for one piaster a loaf. “If she sold one hundred loaves, she would earn one Syrian pound a day. It was a time of hardship and deprivation for us,” Sabra said.

According to personal accounts, many factors have shaped a forceful yet understated political career: Disillusionment, like many other Syrians communists, with the Soviet brand that forced itself onto them and against which they rebelled; a work ethic that saw him distinguished as a primary school teacher then a Geography student at university, and which, by 1985, made him a member of the Central Committee of the Communist Party Political Bureau at the age of 38; perseverance, having spent two years in solitary detention, and almost a lifetime in a country where, up until very recently, the prospects for democratic change appeared slim.

More significantly, Sabra’s popularity in part stems from the fact that he is a Christian. Sabra has acknowledged a certain nostalgia for the Syria of the 1950s, one of the enduring icons of which was Faris al-Khoury, a Presbyterian who served as prime minister in several cabinets and was Syria’s representative at the inauguration of the United Nations in 1945. Khoury’s political success is hailed by Sunni Muslims as proof of their willingness to accept members of religious minorities as equal citizens. Sabra’s Christian leadership is satisfying to many in the opposition who claim Assad is stoking sectarian fears in the country’s civil war. True to his secularist credentials however, Sabra plays down his Christian background, which, ironically, may prove to be an asset as Syrians dream of a new Khoury-type leader to unite the opposition and heal confessional wounds.