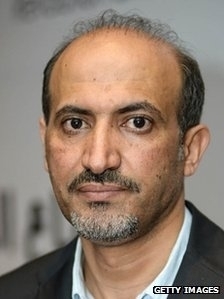 Ahmad Jarba, born in the city of Qamishli in 1969, is a Syrian politician. He is currently the president of the National Coalition for Syrian Revolutionary and Opposition Forces. His election was decided in the second round of voting of a three-day meeting organized by the coalition in order to renew its board. He obtained 55 votes, three more than his rival Mustafa Sabbagh, who was supported by Qatar.

Jarba, who holds a law degree, is a member of the Revolutionary Council of Syrian Tribes representing Al-Hasakah and has close ties with the Saudi government.

Jarba is a Sunni Muslim from the north-eastern Syrian city of Qamishli, in the Hasakah province. The province is home to Arabs, Kurds and other ethnic minorities such as Armenians and Assyrians. He is a member of the Shummar tribe, one of the most prominent tribes in eastern Syria. The Shummar also has a presence in Iraq, Saudi Arabia and Jordan.

Jarba, who studied law at the Arab University of Beirut, was politically active in the 1990s and imprisoned between 1996 and 1998 for opposing President Bashar al-Assad.

According to a statement by the coalition, Jarba was arrested, detained and questioned by Syria’s notorious intelligence agents in the early days of the revolution, in March 2011, because of his anti-regime stance.

Jarba has played a vital role in bridging the gap between tribes in eastern Syria and the opposition.

As mentioned earlier, Jarba was jailed in March 2011, at the start of the current uprising, for supporting pro-democracy protests. He left for neighboring Lebanon that August, after his release.

He has subsequently spent time in Saudi Arabia and is believed to maintain close ties with Saudi Arabia, which is a leading source of support for the Syrian opposition.

He is close to the faction of Syrian secular dissident Michel Kilo, who has sought to gain the support of minority groups in the face of a possible Islamist takeover.

He suspended his membership of the National Coalition in March 2013, following its appointment of Ghassan Hitto as prime minister of the organization’s interim government. Jarba went on to help administer rebel-held areas.

In recent months, Jarba was a leading advocate of providing arms to the opposition forces.

Although he often wears a Western-style suit and tie, some of Jarba's official photographs show him wearing the traditional robe worn by Arab tribesmen.

Jarba was elected president of the National Coalition on Saturday July 6, following a close run-off with businessman Mustafa Sabbagh. No opposition candidate was able to emerge with a majority during an early morning ballot, leading to a run-off vote between Jarba and Sabbagh. Jarba ultimately emerged with 55 votes, edging out SNC secretary-general Sabbagh, who obtained 52 votes.

Speaking following the vote, senior SNC official Adib Shishakly told Reuters, “A change was needed,” adding, “the old leadership of the coalition had failed to offer the Syrian people anything substantial and was preoccupied with internal politics. Ahmad Jarba is willing to work with everybody.”

Asharq al-Awsat says that the coalition is deeply divided into three major camps: the Jarba camp, the Sabbagh camp and the Muslim Brotherhood camp. Muslim Brotherhood representative Farouk Tayfur was elected as one of the two SNC vice-presidents, along with well-known Syrian opposition activist Suheir Atassi. Anas al-Abd, head of the Justice and Development movement, was elected as SNC secretary-general, replacing Sabbagh.

The division of the coalition and Syrian opposition was reflected in a campaign that was held against Jarba since he was elected. The campaign depicted Jarba as an ordinary tribesman whose job was “smuggling drugs,” and who had been arrested for that.

Other sources: The National Coalition, BBC, Asharq al-Awsat, and Reuters