The woman who said No to ISIS 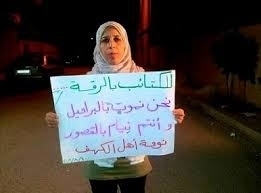 Souad Nofal is the woman who stood up by herself, for months, opposing the ISIS (Islamic State in Iraq and Sham) in Northern Syria. She started protesting by herself when the ISIS kidnapped her brother in law and other friends of hers, she kept on doing so until the ISIS fired on her and wasted her blood (which mean anyone who finds her could kill her with no question asked). Today she is hiding somewhere in Raqqa (Northern Syria) refusing to leave Syria.

Souad Nofal was just a random Syrian lady for many years. Her father was a traditional Middle Eastern father who was worried about his daughters when they were still growing up; he banded the satellite in his house for many years. Nofal and her sisters, therefore, were only able to get their information about the world from the governmental Syrian TV and news outlets: "Its not until 6 years ago is when I started knowing more about what is going on in the world. That was when I started opposing the regime" Nofal says, "when I learned about all the unfairness that we live in, when I learned about Hama in the 1980's, I was very angry to have lived in Syria for many years not knowing these facts", she says.

Nofal was born and raised in Raqqa, however, her family roots go back to the suburbs of Idlib (Northern Syria). In 1994 she got her teaching degree from the college of teachers. In 2006 she graduated as a classroom teacher and started teaching elementary school children in Raqqa, ages 7 to 12. She continued doing so until she was punished under the Assad regime for protesting against the regime. She was expulsion and her salary was cut off.

Nofal was one of those who protested from the very first day in Raqqa, the first martyr in Raqqa was standing in the front line of the same protest that she attended, " bullets passed by me but didn't injure me", she says. Ever since then, Nofal protested in every demonstration that took the street against the Assad regime. She, however, never told her family what she was doing because she thought they would band her from doing what she believed in.

When displaced families arrived to Raqqa from other corrupted cities like Der az-Zor and/or Homs, Nofal and her friends started making handmade crafts to sell in order to be able to fund the refugees with basic life needs. "My sister, Remal, used the nail polish to paint the Syrian revolutionary flag on coffee mugs so we can sell them to have money to feed the families in need", Nofal said.

After the liberation of Raqqa, Nofal and her fellow activists formed the "The Local Council of Raqqa" to run the city while no government was there. The Local Council of Raqqa was fought back by the Islamist who tried to take over and form their own type of government, on one hand, and got involved in further troubles with other activists in the city. Nofal and her fellow activists thought there was no point of keep fighting over the council if there is another group of activists dealing with it, so they resolved their council and went back to focusing on how to improve the city after the regime was gone, according to Souad.

However, a while after the liberation, they had to pause everything and start protesting again. This time it was against the extremists at the ISIS, who started kidnapping and torturing activists as much as the regime was doing. Souad's sister, Remal, was kidnapped and tortured by a lady who worked with the "Islamic Legitimacy" before they let her out again.

Alongside, Nofal and her fellow activists tried to keep doing civil work to improve the civil life in the city. They formed the Free Youth of Raqqa that dealt with civil activism work, aid and cleaning the areas that gets shelled.

This, however, didn't appeal for the extremists at the ISIS, who have taken over power in the city by then.

Right after the ISIS kidnapped the team of the "Council of Tal Abyad", Nofal and other fellow activists protested in front of the headquarters of the ISIS in Raqqa. Few days after, the ISIS kidnapped Firas Al-Haj Saleh, Souad's brother in law, who was protesting against them as well. Nofal and other friends protested calling for his freedom, the ISIS replied by firing on the protesters. Two days after, they kidnapped Ibrahim Al-Ghazi for organizing a campaign calling for the Syrian revolutionary flag to be the only symbol of the revolution in Raqqa.

All of this lead to a discussion that was taken from Souad's fellow, the Youth of Raqqa, to sign on a statement of not protesting against the ISIS for the "time being". Souad, however, refused to sign the statement on July 19th 2013.

On July 20th, 2013, she went to protest by herself, same on July 21st, 22nd, 23rd, etc. She protested in front the headquarters of ISIS in Raqqa by herself with one poster that addressed a different issue every day. For two month, Nofal continued doing so by herself and in front of everyone, "I wanted to strip them down," she said. "to show the world who they really were and how far away from Islam they are, and show them that we are not afraid of them".

On September 25th, she went there with a poster addressing the burning of the two churches in Raqqa. On that day two Tunisian men from the ISIS attacked her, took her poster, and tear it apart. The day after Nofal went there as well, she was stubborn enough to write another poster and raise it up in front of the headquarters of the ISIS. This time they fired on her after telling her that she is not Muslim instead she is an apostate which give the rights for anyone to kill her.

Ever since then Nofal is hiding out of sight somewhere in Raqqa. She still refuses to leave Syria and say that she doesn't want to leave for as long as she could survive like this.

Sherry al-Hayek contributed to this report