Sharaa asked, "Why don’t we, officials or ordinary citizens, work to shorten the steps and suffering?" but no one would listen to him 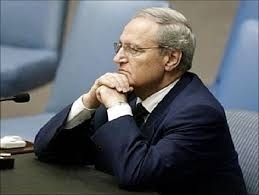 Since the Syrian revolution broke out in March 2011, Syrian Vice-President Farouk al-Sharaa appeared twice: once when he chaired the National Dialogue Conference in June 2011, and for the second time in his famous interview in al-Akhbar in December 2012. Had he defected or not? Was he under house arrest? All kinds of questions and rumors have erupted whenever the vice-president is mentioned. In Syria, where transparency is the last thing one looks for, it is always difficult to know the truth. But the truth is that the vice-president has lost his seat in the Baath Party Regional Command, which is a clear message that President Assad does not like Sharaa’s silence.

Farouk al-Sharaa was born in one of the villages of Deraa in 1938. He studied English Language at Damascus University, then went to London to continue his education. In London, Sharaa was studying International Law while at the same time working as a general manager in Syrian Air. He moved in between the Syrian Air offices of Dubai and Damascus until he was appointed as Syria’s Minister of Foreign Affairs in 1984.  Hafez al-Assad often expressed his satisfaction with Sharaa’s performance, and admiration for the decisions he made at moments when Sharaa was required to make a decision without consulting the President. At the Madrid Conference on the Middle East in 1991, Sharaa, as Minister of Foreign Affairs, was to speak on behalf of his country, like many other delegates. But Sharaa delivered much of his speech in an improvised style. It thus seemed a strange presentation—so different from the performance of all other Syrian diplomats who would strictly follow their instructions—when he drew on a piece of paper and showed it to the people in the conference hall and to the millions who were watching on television. The paper was a copy of a poster distributed by the British police showing a photo of Yitzhak Shamir, the Israeli Prime Minister and the head of the Israeli delegation to the conference. The poster declared that Shamir was wanted because of his terrorist activity in Israeli terrorist organizations. The presentation, which was a political breach, was followed by the shuttle diplomacy-like activities that Sharaa kept up throughout the years he served as Foreign Minister until 2006.

Moreover, Sharaa had his own stage in the negotiations held in Shepherdstown, West Virginia with the Israeli Prime Minister Ehud Barak. When Sharaa refused to shake hands with Barak throughout negotiations, it gave a positive impression to those Syrians and Arabs who are fond of emotional shows. At the same time, the secret channels of negotiations between the Assad regime and Israelis were active before and after Shepherdstown—which was the less important of these negotiations, and not the occasion of the 1995 meeting of the chiefs of staff of the two countries, Hikmat Al Shihabi and Shahak—in addition to many other meetings at various levels.

The resignation of Abdulhalim Khaddam left a nominal vacancy in the regime of Bashar al-Assad. Assad wanted to fill this vacancy with a man of the same mentality and the same diplomatic approach, from the old Baathists, from the same religious authority, and from the Syrian Sunni sect. For this reason, came the elevation of Sharaa along with Dr. Najah Al-Attar to the positions of vice-presidents, as an attempt to reintroduce the regime of Assad the senior. But this elevation meant the end of political life for Sharaa, who sat completely on the sidelines, reading newspapers in his office more than closely watching political events and holding “unimportant” meetings in a clear intention to salvage his name and reputation.

Sharaa didn’t want to receive one insult after the other, as usually happened with his predecessors, or to be found in his office one morning having committed suicide. Sharaa had to patch-up the unforgivable political mistakes that Bashar al-Assad had personally committed at the regional and international levels—which included his bungling of relations with the "Arab axis of moderation" (so-called at the time) when he described the Arab leaders and kings as “half-men.” So, Farouk al-Sharaa was the man who had to justify and explain the situation, and perform his duty by making visits of condolence and congratulations in an effort to make the region’s countries accept Bashar Al-Assad once again.

As the Syrian Revolution broke out in 2011, the Assad regime returned to its old stand-by, Farouk al-Sharaa. And as the policies of the country are usually set by the security men, al-Sharaa was chosen to lead the national dialogue with the angry crowd, but only according to the narrow standards and conditions set by the security policies. Sharaa seemed unwilling to continue the task and quite desperate about the regime’s intentions to achieve any reform. His speech in the opening session of the national dialogue conference that was held in Sahara on the tenth of July 2011, was a “personal commandment” upon which he wanted to put his own mark and tell the outside world what he wanted to say (in between the lines). “The tenth of July is the beginning of the national dialogue, it is different from any other day, because we hope it will lead eventually to a comprehensive conference that announces the transition of Syria to a pluralistic democratic state where equality prevails and citizens participate in shaping the future of their country!"

“Certainly,” Sharaa said, "the shift in the path of laws and the transition from one mode to another cannot pass easily and smoothly without obstacles, whether natural or artificial… which are based mostly on the large number of errors and the waste we used to push under our carpets without deep thought about the coming days… On your behalf I say that conveying your voices is a legitimate right, as are the other legitimate demands related to the people’s daily lives. This dialogue is not a favor, and can’t be considered a waiver from the government to people, it is, rather, the duty that every citizen must carry out when we proceed from our firm belief that people are the source of authorities, like all other developed counties.”

Sharaa asked, with a sigh, "Why don’t we, officials or ordinary citizens, work to shorten the steps and suffering by benefitting from the experiences of those people and nations who paid a dear price, for decades, of their son’s sweat and blood to begin the process of pluralistic and democratic reform.”

News then began to spread that Sharaa had defected from the Assad regime, that he had received help to run away and reach a neighboring country. Accordingly, there came many initiatives demanding that Sharaa, since he was the vice-president, lead the transition in Syria. But none of these reports or initiatives could recreate any role for Sharaa, who was excluded by a decision from Bashar Al-Assad even before the Syrian revolution, because the era of political work in Syria had ended and been replaced with the security forces’ mentality.