Not everybody likes Louay Hussein, but almost everybody takes him into account 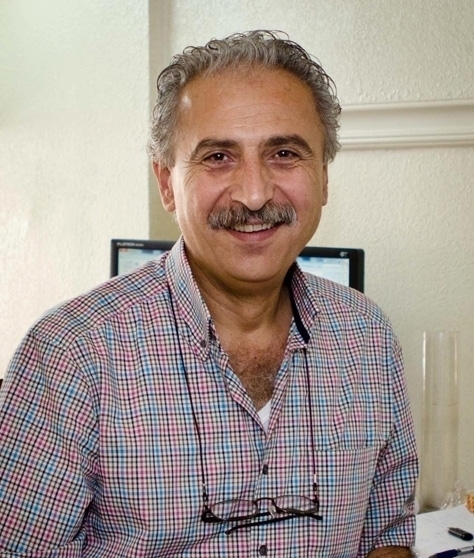 Louay Hussein was born in Damascus in 1960 to a lower-middle class Alawite family. His father, originally from the village of Safsaf near Latakia, was a warrant officer in the Syrian army. Louay studied Philosophy at Damascus University and had distinguished relationships with his professors, including Tayeb Tizini and Ahmad Barkawi. When he was 20, Hussein joined the group then most active against the rule of the Assad family, the Communist Action Party, where he became an active member.  In the early 1980’s Hussein joined the Palestinian Resistance in Southern Lebanon for a couple of months before returning to Syria. In 1984 he was arrested by the Military Security Agency and was tortured for weeks. He described this experience in his book al-Faqd (The Missing, in English).

When Hussein was released in 1991, he started writing for Lebanese newspapers and became famous for criticizing the Syrian regime when few people dared to do so. He also founded a publishing house called Dar Petra, but its activities were restricted by the security services. His memoir of his years in prison, Loss, was published in 2005 in Lebanon. Since then, Hussein has also published most of the newspaper articles he wrote in Lebanon.

Together with Hassan Abbas, Rula Rukbi, and Wael Sawah, Hussein co-founded an organization that called for defending secularism in Syria. While the group was never licensed, Hussein managed to organize the first conference on secularism in the Levant region, where speakers like Sadek Jalal al-Azm and George Tarabishi spoke. The following year, then Minister of Culture Riad Nassan Agha (now part of the opposition) prevented Louay from holding a second conference.

Hussein was among the first to be detained by Syrian authorities for expressing support for the protesters in Deraa at the start of the uprising in March 2011 and for providing information to the international media on what was going on inside the country.

Hussein openly defied the authorities by organizing a public gathering of over 190 opposition figures in Damascus on June 27, 2011, in what was considered to be the first ever public opposition activity inside Syria.

Months later in September 2011, Hussein co-founded the “Building the Syrian State” movement with other intellectuals and activists, and has served as its chair ever since.

Hussein believes that the priority is finding a “made-in-Syria solution” that can help prevent more bloodshed in Syria and can plan for the removal of the oppressive regime in a peaceful and secure way.  Therefore, he has categorically rejected any international intervention in the Syrian situation.

Hussein feared as early as late 2011 that demonstrations would significantly diminish, a fear he attributed to the increasingly violent oppression by the authorities at the time and the rise in the number of armed operations by groups opposed to the regime, such as “The Free Syrian Army.” This is why Hussein expected more bloodshed in Syria and worried that if “we fail to reach a homegrown settlement of the conflict very quickly, we will clearly witness different aspects of a civil war in the near future.”

He repeatedly criticized the regime and the leadership of the opposition for not being “up to their responsibilities at the national level.”

Louay Hussein has publically criticized the Western policy towards Syria. He blames the United States and Russia for failing to get together on a vision to solve the crisis in Syria.

He criticized the Obama administration’s plan to strike Syria and said the strike would just harm ordinary people. In addition, he was among few people who said that the U.S. would not strike Assad. Writing on his personal Facebook page, Hussein said, “I think that the issue of American or international military intervention in Syria is nothing more than a media stunt, and has been from the outset.”

“Iran's interests continue to fly in the face of Israeli interests,” he said.

“From my point of view, the interests of Israel tend toward stability in the region and not to flounder in paths that can lead to unforeseen results.”

“The region had this stability before the evolution of the conflict in Syria. And Israel's problem with Hezbollah was dormant and dependent on the results of the Iranian nuclear negotiations."

Hussein added that the interest of the West and Israel is to "accelerate Geneva II to re-adjust the situation in Syria and to manage the Syrian crisis so that it does not hurt their interests.”

Permission for American military intervention in Syria is not up to the United States, he said, but is subject to the will of Israel.

“Israel is the security official in the region,” he said.

In October, Hussein renounced his nomination by western diplomats for participation in Geneva conference for peace talks over the Syrian conflict. He denied receiving any official invitation from the Syrian opposition or from international bodies.

Hussein said he refused to participate in any Western “cooked” negotiations.

“I will not attend unless my presence will have an effect on the negotiations, because I reject any international dictates,” Hussein told Zaman al-Wasl, a Syrian opposition website.