Muntaha Atrash is the daughter of the nationalist icon, Sultan Atrash 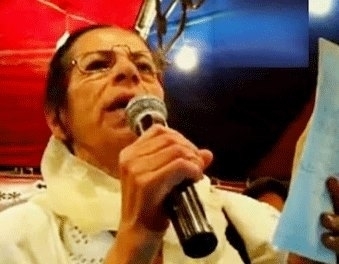 Muntaha Atrash is one of the women to have stood for the Syrian revolution since the very beginning in 2011. She is also known for her effective speeches that were widely circulated in international media. She calls for the resignation of Basher Assad in response to the demands of peaceful protesters.

Muntaha Atrash is the daughter of Sultan Atrash, the leader of the so-called “Great Syrian Revolution” of 1925, and considered one of Syria’s greatest nationalists.

She graduated from Cairo University’s Faculty of Arts in 1967 and began a career as a journalist with the Syrian Arab News Agency (SANA). In 1991, Atrash publicly tore a photograph of the dictator Hafez Assad in response to his decision to participate with the international coalition invading Iraq and his handover of Iraqi pilots who fell in Syrian territory, to international coalition forces. The regime reacted by removing Atrash from her post, but, due to her high reputation and relation to Sultan Atrash, she was spared from prison.

Atrash began her work in human rights the Syrian Organization for Human Rights, or Sawaseya, alongside a number of well-known national figures including the philosopher Sadek Galal Al-Azm and Taib Tezenyin. She was elected as the group’s spokeswoman in March 2010.

Since the outbreak of the Syrian Revolution in March 2011, Atrash, now 70, has visited many rebellious areas in the Damascus countryside including  Douma, Mouadamieh, Qaboun, Qadam and Midan, giving enthusiastic speeches calling for Syrians to embrace the revolution and demanding the criminal regime hear the masses and stop killing the peaceful protesters. She persisted with her activities until she began receiving death threats from regime supporters, prompting her to suspend her activities.

In an interview with Asharq Al-Awsat in April 2011, Atrash denied that there was any foreign conspiracy against Syria, and stressed that the protests were being carried out by Syrian youth who only wanted democracy.

She said that Assad was “playing with fire”, and that he should step down from power and return to dentistry.

She was among the first few who called on Assad “as a mother or a big sister,” to “honor the blood of your people and step down from power with your head held high.”

Atrash’s position on the revolution has not changed, despite the absence lately of her declarations and public appearances. However, she has expressed new fears about the diversions form the revolution as a result of violence and armed conflict, as well as the trend towards sectarianism.

Bringing Atrash to the Terrorism Court

In mid-2013, the Syrian Ministry of Justice, at the command of the security services, made a public case against Atrash on charges of supporting terrorism and incitement. She was brought to the Terrorism Court, but her arrest drew public criticism, and she avoided arrest given the regime’s fear of provoking the Druze community given her high standing and symbolic leadership in the sect.

Atrash is considered a revolutionary leader, especially for the elite opposition in the Druze community. She continues her revolutionary activities, but from outside political organizations and alliances with the current opposition forces.